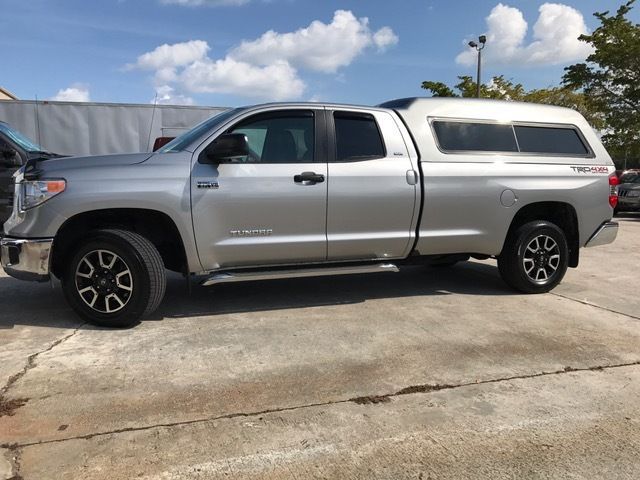 If you have any questions feel free to email: albertinaarrieu@ukretailers.com .

2014 Tundra SR5 TRD double cab long bed with matching ARI cap. Cap has LED Lighting, sliding windows and screen.
This vehicle has a 100k mile extended power train warranty through Toyota and the balance of that warranty will be
transferred to the new owner upon purchase! Odometer shows 85,642 in picture, but vehicle will be driven daily
until newly ordered vehicle arrives. Vehicle oil and services always done on time. The bed of the truck has a spray
lining on it. Hitch with brake controller installed in vehicle. 4x4 with shiftable console mounted shifter, vehicle
has Power window, door locks, W/Alarm on fob. Both driver and passenger sides have weather tech mats, rain
deflectors and bug deflector. Truck was specially ordered with 836 special engine package only available in several
states from Toyota. Truck also had anti-sway bar Toyota TRD installed. Truck has minor scratches, two noticeable
dents the size of a nickel on either side of truck and some road rash on the front grill area. Vehicle spent 95%
of time up and down interstates at 2000 RPM. Overall for the mileage it's a 9 out of a 10! Tires have about 23k on
them. The only reason why I'm selling the truck is to buy a dually. Awesome vehicle for those long trips with all
your toys.
The photographs are of the actual item for sale and are a good representation of the condition of the unit. If you
do not see it in the photographs, please do not assume that an item/or accessories are included with a unit unless
it is pictured or in the listing details. All items are sold as-is, as pictured. We always show the actual photo
of the item in the listing for single items. However, if multiple items are also available we only take 1 photo,
any additional purchased items will be in similar condition.