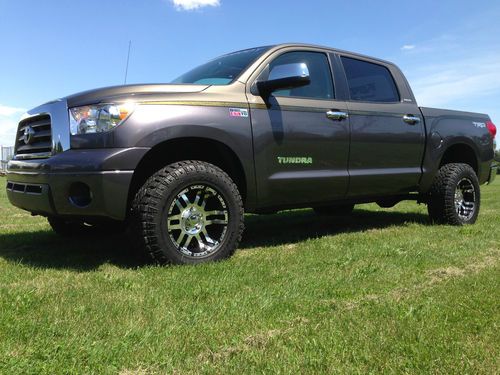 This is a 2008 Toyota Tundra Limited with a long list of features. This truck is a super clean and one of a kind showpiece. It has been meticulously maintained in every way. It has a 3" leveling kit giving it a perfect stance when matched up to the brand new Eagle Alloy 197 in 18x9 and wrapped in Brand New Goodyear Wrangler Duratrac LT275/70R18 tires (33"). The paint is an absolute thing of beauty with not so much as scratch or chip. It is a custom two tone with neutral colors giving it that ultra clean look, but without the "loud" colors. Its is Slate Gray on the bottom, and Cashmere on top with a House of Kolor Gold Marblizer stripe wrapped in black seperating the two. Everything is painted with no decals, and no paint lines. Paint is all DuPont with plenty of clear to give it that deep wet look, then it was wet sanded flat taking away any paint lines or stripe lines. The engine is the very powerful i-force 5.7 V-8, mated up to the 6 speed automatic transmission, and turn knob 4x4 transfer case. The Light mocha leather interior is in near perfect condition, and is the rest of the interior, carpet, and headliner. Creature comforts of the limited include power seats with Heated Leather, power windows including the rear roll down glass, power locks, power tilt/telescopic wheel, steering wheel controls for radio, power moon roof, back up sensors, mirror blinkers,and center shift center console. There is a Toyota bed liner in the bed as well. The only bad part of the truck is the small repaired crack in the drivers mirror as shown in the pictures that does not affect folding, adjustment, or blinker in any way, only cosmetic. This is a beautiful truck that anyone would be proud to own and drive. Truck runs, and drives perfect, and 4x4 works as it should. Truck is located in Central Michigan and I can help to arrange shipping to the continental U.S. at buyers expense. A $1000.00 deposit is due within 48 hours of auction closing via paypal, and balance is due within 7 days unless previously arranged. I will be happy to answer any questions, or send more detailed pictures of any part as requested.