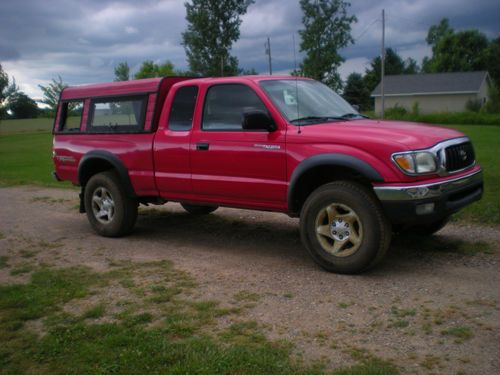 Condition: UsedA vehicle is considered used if it has been registered and issued a title. Used vehicles have had at least one previous owner. The condition of the exterior, interior and engine can vary depending on the vehicle's history. See the seller's listing for full details and description of any imperfections.Seller Notes:"Good mechanical condition, always dependable daily driver, original owner. Has original paint but many small scratches and 4-6 longer scratches.Both bumpers have a little rust and front has a 2" dent from a minor accident in a parking lot.Has older red aluminum cap which has the 2 rear windows out. Tires have about 10,000 miles on them, all season radials.Back sliding window in cab is missing and has a piece of plexiglass there.Has 1 tear in right seat about 2" long from wear."

2003  Toyota Tacoma 4x4 x-cab red pickup for sale by original owner. It has been very reliable, my daily driver and a great truck. It has many more miles left in it and is in good mechanical condition with no known problems. It does have many small scratches from wear and use, and about 4 longer scratches. The bed has many scratches but very little rust. The bumpers have a little rust and the front bumper has a dent about 2"x2" from a parking lot bump in Feb 2013.
There is a red aluminum cap that still works but is missing the 2 rear windows. The tailgate is very good with no rust known. The sliding rear window is missing and there is a plexiglass piece there. The seats are generally good except one 2" long tear on the passenger seat side. It is smoke free. The air conditioner works but may need to have coolant added as it does not get really cold. Overall, it has wear and tear expected with the age and mileage.
Buyer will need to deposit $500.00 and make arrangements to pick up vehicle within 48 hours of sale . If I have not heard from the buyer or received the money within 48 hours, it will be relisted. Buyer will pay any and all expenses to pick up the truck and transport it to their home.
Please feel free to ask any questions.