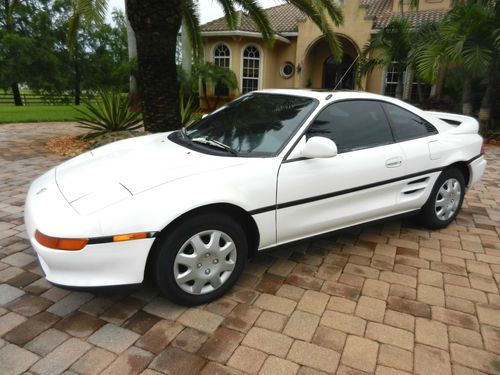 * Automatic transmission
* Power steering
* Power windows
* Power locks
* Sunroof
* Am FM stereo with CD player
* Cold A/C
This is a super nice 1992 Toyota MR2 that runs and looks excellent! This beautiful Arctic white MR2 comes fully equipped with all of the above mentioned options plus cruise control, tilt wheel, rear spoiler, powerful and economical 4 cylinder engine and all the reliability Toyota is famous for!
The exterior of this MR2 is very original and in nice shape. There are a couple of inevitable small scratches but it shows very well. The interior is in beautiful original condition with a perfect dash and door panels, excellent seating surfaces and carpeting and an overall "mint" appearance. The power window cover on the drivers door needs replacing, that's it.
This car runs and drives excellent! If you have never driven a Mid Engine MR2 you will be thrilled with the amazing handling and driveability of this car! New timing belt, tune up, water pump and oil change....its ready to go! Great gas mileage, amazing handling, beautiful lines and Toyota reliability...what else can you ask for! Don't miss out on owning this beautiful MR2 at a great price and remember, this is a no reserve auction so the highest bidder will own the car! Call me at 305-992-3575 if you have any questions. Thanks!