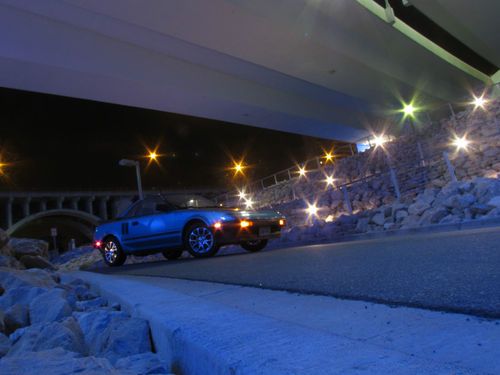 Got a 85 Toyota MR2 here, its one of the nicer ones left here in MN. Its light blue, obviously. and its a 5 speed too! I saved this car from a owner who didn't know what they were doing, I've thoroughly gone through the car and fixed everything that's needed to be fixed so it is reliable again, you can thank me later. Comes with original wheels, 2 boxes of all this really rad extra stuff and every part the previous owner deemed necessary to take off, except the timing belt cover, the gnomes took that one. This car is great! It gets awesome mileage, i deliver sandwiches part time and usually get 35-40 mpg, its also one of the best handling cars I've ever owned. Also this car pulls the ladies harder than Burt Reynolds in a DeLorean with Phil Collins in the tape deck, a few guys too if that's your thing, i wont discriminate, personally not my thing though.The engine is a 4A-GE, same as AE86 Corolla and AE111 Corolla fame. I love this engine, it falls on its face under 4500rpm because Toyota decided to make the intake ports the size of baseballs so it ruins the flow of the head at low RPM but otherwise is a stellar engine especially for being designed in 1980, and is one of the best sounding 4 cylinder engines ever (second to the Honda B16B, and Subaru EJ257). If you're wondering where you've heard 4A-GE before its because Takumi Fujiwara in Initial D has that engine in his AE86 but he has the 20V from the 90s i just got the 16v from the 80s. pfft the 1980s were cooler anyway, AND this engine you can actually find parts for at Autozone, unlike that JDM 20v Crap. Speaking of such, parts for this are cheap as hell, alternator $80, water pump $30 i love it!The exhaust on this sucks though, get a new one. I just was in a pinch and fabbed this up with a friend in like an hour.I'm a semi motivated seller but I'm ready to sell it if anyone wants it. If you are out of state you are responsible for shipping and there is no warranty expressed or implied.
Pros:-Water pump, thermostat, alternator and serpentine belt all done in last 2 months-Ignition Coil/ plugs/ Distributor cap and Rotor all done in last 3 months-interior pretty solid-Mechanically sound-comes with box of extra parts-comes with stock wheels-New headlights, and fresh tires (literally 200 miles on them)-Just put in a new windshield yesterday (6/8/2013)Cons:-small rust in front of rear quarter panel $300 extra and ill get it fixed for you-no radio-sway bar end link clicks if you hit a really big pothole-the exhaust is pretty jank-that whole being mobbed by women thing