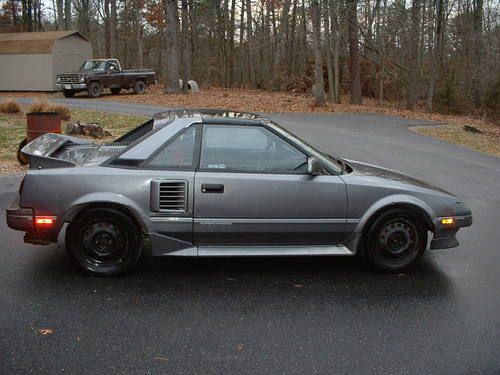 1988 Toyota MR2 Super Charged.  Has the Blitz Access programmable ecu.  Redline has been upped to 7800 RPM.  New wheel bearings on all four wheels that were done about 2 years ago using all new oem Toyota parts.  Runs and drives great for its age.  According to previous owner the engine was rebuilt with new bearings, rings, and timing belt at around 203,000 miles.  I purchased it with 230,000 miles and have been using it for a daily driver since last year when I parked it because I purchased newer car and didn't want to keep racking up miles on it.  Has two surface rust spots on car and a dent on rear passenger quarter pannel.  Had plans to swap a 3SGTE into it and use it for a track car but do to recent layoffs at my place of employment have forced me to let it go.  I have really injoyed owning and driving this fine piece of japanese engineering.  Would like to see it go to a good home.  Winning bidder is 100% responsible for pickup or shipping of vehicle.  You can request a shipping quote from DAS.  I have used them twice now with no issues or complaints.  Thank you for looking and good luck bidding.