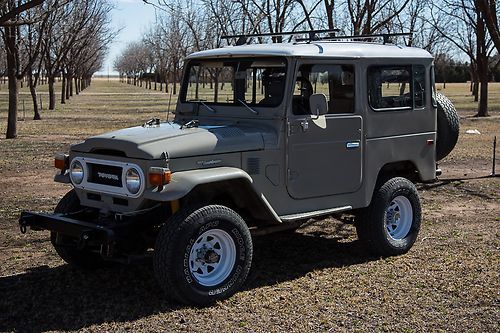 Condition: Used: A vehicle is considered used if it has been registered and issued a title. Used vehicles have had at least one previous owner. The condition of the exterior, interior and engine can vary depending on the vehicle's history. See the seller's listing for full details and description of any imperfections. ...
1977 model New Mexico Toyota Land Cruiser FJ 40
67000 original miles
Original 2f engine
4 speed transmission
Original radio
Original jack and tool bag under driver seat
Additional equipment or add on
Repainted approximately around 1997-8
5-8 inch wide Wagon spoke rims with 10.00 x 31 tires with approximately 11000 miles on them.
Vintage air- air conditioning
2 1/2 inch old man emu lift kit with new shocks
Tilt steering
Saginaw power steering conversion
Yakimaw top rack
Rhino headliner
Brake master cylinder replaced within past 3000 miles.
Both clutch cylinders replaced within past 3000 miles.
Smog control removed during air conditioning and power steering installation. Most of parts from smog as well as original steering box available.
Maintenance of gear boxes and drive train performed on regular basis.
Barn stored in dry New Mexico climate.
One small rock chip on windshield glass otherwise all other glass has no cracks or breaks.
Very tight and sound FJ 40. If looking for something to restore to new condition or use as a daily driver, you will not find a better more sound Cruiser anywhere.