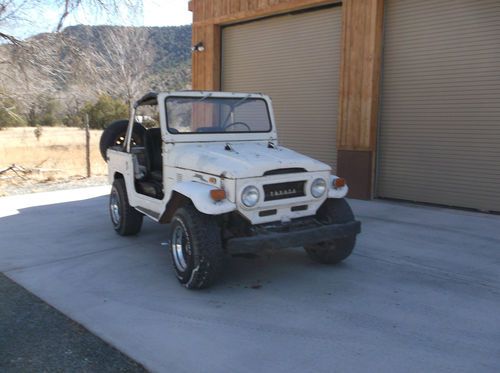 1973 TOYOTA FJ40 LAND CRUISER. THIS WAS A SOFT TOP MODEL. I TOOK THIS TRUCK IN ON A TRADE SO I WILL TELL YOU WHAT I KNOW ABOUT IT. IT IS A NEW MEXICO TRUCK . BASICALLY IT DOESN'T HAVE MUCH RUST. DRIVERS FLOOR HAS A SMALL SPOT. THERE ARE ALSO VARIOUS SMALL SPOTS OF RUST ON THE EXTERIOR OF THE BODY WHICH YOU WILL SEE IN THE PHOTOS. THE FRAME AND UNDER CARRIAGE IS VERY SOLID. THIS WAS PRIMARILY USED AS A HUNTING VEHICLE FOR THE PAST SEVERAL YEARS. IT IS A RESTORABLE FJ40 SINCE IT HAS VERY LITTLE RUST. THE TRUCK WILL NEED A NEW BATTERY. IT HAS A NEW ALTERNATOR AND STARTER. THE BRAKES WILL NEED BLEEDING, THE MASTER CYLINDER NEEDS NEW FLUID LIDS. THE BRAKES DO PUMP UP AND STOP THE TRUCK. I HAVE DRIVEN IT, THE TRANSMISSION IS THE 3 SPEED ON THE FLOOR AND IT SHIFTS GOOD WITH NO NOISES, FRONT AND REAR DIFFERENTIAL ALSO SOUND GOOD AND THE FOUR WHEEL DRIVE WORKS AS IT SHOULD. IT GOES DOWN THE HIGHWAY STRAIGHT WITHOUT EXCESSIVE STEERING PLAY. THE MAN I GOT THE LAND CRUISER FROM HAD IT SINCE 1988. THE FJ40 ALSO NEEDS A TUNE UP AND CARB REBUILD I BELIEVE IT COULD USE A FUEL PUMP AS WELL. THIS IS A PROJECT YOU CAN'T COME AND DRIVE IT HOME DUE TO THE FACT IT NEEDS WHAT I HAVE MENTIONED. LOOK AT THE PHOTOS AND ASK ANY QUESTIONS YOU MIGHT HAVE AND I WILL TRY TO ANSWER THEM . THIS FJ40 LAND CRUISER IS SOLD AS IS WITH NO WARRANTY IMPLIED OR EXPRESSED IT IS SOLD AS A PROJECT VEHICLE. YOU ARE BIDDING ON JUST WHAT YOU SEE . I DON'T HAVE ANY OTHER PARTS FOR IT, IT COULD MAKE AN AWESOME ROCK CRAWLER. THE MILEAGE READS 49179 MILES I HAVE NO IDEA IF IT HAS ROLLED OVER ONCE OR NOT. THE FJ40 HAS A GOOD CLEAR NEW MEXICO TITLE.


I REQUIRE A $500.00 DEPOSIT WITHIN 3 DAYS OF THE CLOSE OF AUCTION . THE DEPOSIT IS NON REFUNDABLE . THE REMAINDER OF THE FUNDS ARE REQUIRED TO BE PAID 7 DAYS FROM THE AUCTION END DATE. PAYMENTS TO BE ACCEPTED ARE CASH , CASHIERS CHECK, OR BANK WIRE.