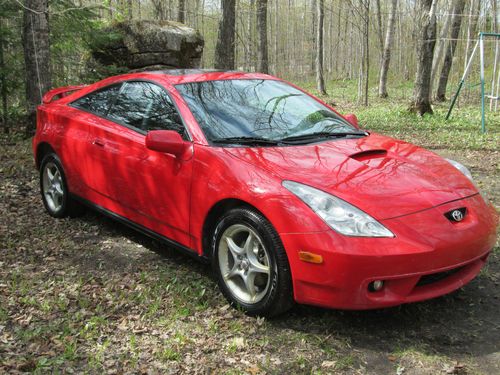 This is my wife's car. We are selling it because we need something bigger, as our family has grown. I have installed many new parts, including: New tires, shocks, wheel bearings, drilled & slotted rotors and pads, ball joints, tie rods, clutch and pressure plate. I also installed a newer rack & pinion that has only 29,000 miles. Most of these parts have virtually no miles on them, brand new. The transmission has new oil. The car drives excellent and gets awesome mileage. The motor is the bullet proof 2ZZ, six speed manual transmission, burns no oil and runs excellent. It has always been well serviced with regular oil changes (every 3,000 miles), the oil remains clean even when it is ready for changing. The previous owner always took it to the Toyota dealer for service. The car does have paint chips on the hood and a few scratches and a couple small dings elsewhere, but it still looks good. The interior is in great shape, with no rips or tears. The carpet is good, but is missing the drivers floor mat. The check engine light is on, but does not effect the way it runs, probably a sensor. Over all this is a great car and has many miles left.