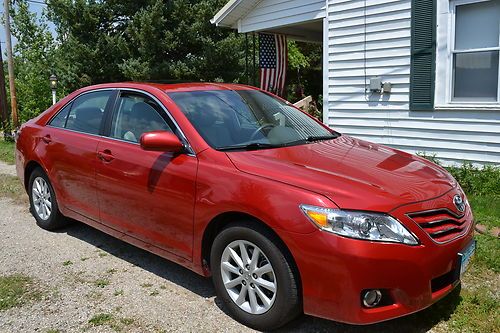 Extremely Clean 2010 Toyota Camry XLE , Leather, and loaded with all the goodies,,this belonged to my Stepfather's Cousin,,he purchased it for Himself and only drove for about 8 months and has decided to purchase a New Car,,he is the Second owner and it was his family,,so the complete history is known,,,car is extremely clean with  'NO EXCUSES'  if you would like to inquirer about the car his cell phone number is  740-464-3669  and that is the best # to get in touch,,also,,his home number is  740-574-9618 ,,,please, no calls after 9PM ,,you can call early as  you like,,,,we require a  $200 Dollar deposit that goes toward the purchase price,,,Cash in person on Pickup only,,,or you and He can go to the local Bank to take care of the Transaction in purchase if you need,,the car has 72,000 miles and has New Brakes and New Tires,,the car is Immaculant inside and out....