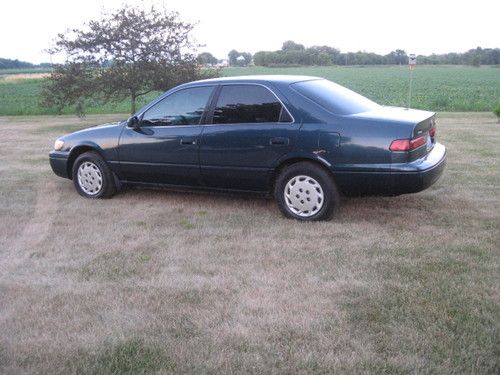 Condition: UsedA vehicle is considered used if it has been registered and issued a title. Used vehicles have had at least one previous owner. The condition of the exterior, interior and engine can vary depending on the vehicle's history. See the seller's listing for full details and description of any imperfections.Seller Notes:"Small dent in drivers side rear door and some stone chips from normal wear"

I an looking  to upgrade to a newer vehicle so I will offer my 1998 Toyota Camry LE for auction. It is an automatic with cruise control, power windows/ locks and very cold A/C. It is in nice condition for the year. I am the second owner and it has never been smoked in since it was new. The interior is nice and clean with no rips or holes in the cloth upholstry. Exerything works fine and it runs and drives excellent. It has been a trouble free car. It didn't have a radio when I bought it so you would have to get one if you prefer. I reciently replaced the exhaust system. Some time ago in a parking lot someone made a smaller dent in the drivers side rear door toward the back of the door. There is a reflection in the picture above the rear wheel. Also the interior is clean and does not have the yellow color that the picture took. This would make an excellent car for work or to drive to school. Any questions please ask. Thankyou!!