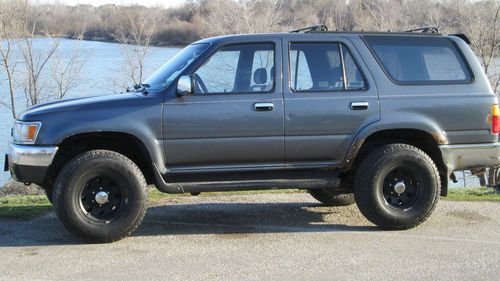 Condition: Used: A vehicle is considered used if it has been registered and issued a title. Used vehicles have had at least one previous owner. The condition of the exterior, interior and engine can vary depending on the vehicle's history. See the seller's listing for full details and description of any imperfections. ...
I AM SELLING MY 1995 TOYOTA 4RUNNER NO WRECKS
CLEAN CARFAX 249 K
ALL HIGHWAY MILES!!
I HAVE ALL THE
PLEASE READ MY AUCTION SITE THOROUGHLY  AND FEEL FREE TO ASK ANY
QUESTIONS
I HAVE ALL THE RECIPTS AND PROOF OF WORK DONE FOR THE LAST 5 YEARS
I ALWAY TOOK CARE OF THE DRIVE TRAIN
GREASED /REPLACED U JOINTS
HAS REMAN MOTOR 22RE LESS THAN 10 K ON THAT CLEAN INTERIOR.. EXCEPT THE DRIVER SIDE
SEAT
SEE PICS
REBULT 5 SPEED TRANNY 2 YEARS AGO RECIPT TO SHOW
ICE COLD AIR!!
RUNS AND DRIVES STRAIGHT BALL JOINTS REPLACED LAST SUMMER
**NEEDS:FRONT RIGHT CV JOINT REPLACED NEEDS LEFT REBOOTED**
**NEEDS FUEL PRESSURE REGULATOR..**
RUST STARTED TO COME THOUGHT ...
**I AM KEEPING THE TIRES AND WHEELS IN THE PIC**
**IT WILL BE SOLD WITH USED TIRES AND RIMS**
ANY QUESTIONS GIVE ME A CALL 800-657-2139
RUNS AND DRIVES STRAIGHT BALL JOINTS REPLACED LAST SUMMER