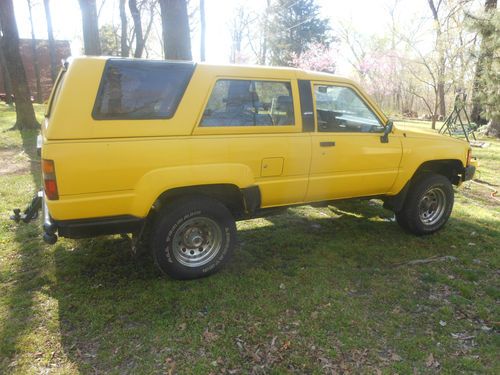 THIS IS THE MUCH SOUGHT AFTER FIRST GENERATION RUNNER. LAST ONE WITH SOLID FRONT AXLE AND FIRST ONE WITH FUEL INJECTION. MANUAL LOCK OUT HUBS.  THIS ONE HAS AN AUTOMATIC TRANSMISSION. REMANUFACTURED ENGINE WITH ALL BRAND NEW PARTS THAT HAS 11,000 MILES WITH A 36,000 OR 3 YEAR WARRANTY.  TRUCK HAS 185,000. TIRES ARE FAIR.  MIGHT NEED A NEW SHIFT SOLENOID ($37 ON EBAY). COULD USE A BRAKE JOB BUT RUNS GREAT. INTERIOR HAS ORIGINAL SEAT COVERS. REMOVABLE FIBERGLASS TOP.  ELECTRIC REAR WINDOW STILL WORKS. RUST FREE BODY

I WILL NOT ARRANGE ANY SHIPPING. BUYER IS RESPONSIBLE FOR ALL ARRANGEMENTS AND COSTS TO SHIP. NO WARRANTY OFFERED OR IMPLIED.