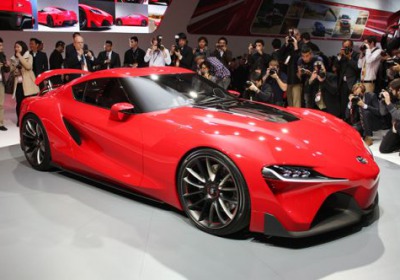 Toyota has brought its A game to the 2014 Detroit Auto Show, showing off the striking FT-1 Concept. Short for "Future Toyota," the FT-1 is, we're imagining, the supposed Supra Concept we reported on early in December.

Penned by the Calty Design Research team, the FT-1 draws inspirations from the FT-HS and the Lexus LF-LC concepts from 2007 and 2012, respectively. We certainly see a bit of Lexus LF-A in the design, while there's more than a hint of Formula One in the FT-1's pointed nose.

"Our team was heavily influenced by Toyota's sports car past, especially Celica and Supra, and we sought to capture some of that history. It is an aggressive, track-focused sports car concept with a presence that has been amplified for shock and awe," said Alex Shen, Calty's Studio Chief Designer.

The FT-1's interior is what Toyota calls a "place of business," which would be a funny description of a Toyota, if the FT-1 didn't look the way it did. The cabin is snug, while a colored heads-up display adds to the sense that this is more cockpit than cabin.

While it may be a concept, it will be available to drive soon, as Toyota worked with Polyphony Digital to add the FT-1 to Gran Turismo 6. According to the press release, which you can view below, the low-slung concept will be available for download tomorrow. Until then, be sure to peruse our full gallery of live images from the floor of Cobo Hall and the press release below.

From Virtual to Reality? Toyota FT-1 Concept Sets the Pace for Future Design

DETROIT, Michigan (Jan. 13, 2014) - Toyota virtually blew the doors off the North American International Auto Show with the reveal of the stunning FT-1 sports car concept. First devised by Calty Design Research in the Sony PlayStation Gran Turismo game environment, FT-1 leapt from the screen to the stage in a race-inspired press conference at COBO Hall.

The name says it all. FT-1 stands for "Future Toyota," and the number "1" represents the ultimate. According to its designers at Calty Design Research, the FT-1 Concept is the ultimate expression of a Toyota coupe design, building upon Toyota's rich sports coupe heritage dating back to the 2000GT, Celica, Supra, MR2 and most recently Scion FR-S. In addition, the concept draws inspiration from Calty's more recent sports car concept work such as FT-HS (2007) and the Lexus LF-LC (2012).

The project started nearly two years ago and represents a labor of love by a passionate, dedicated and gifted Calty design team. "The FT-1 is a dream-project for a designer and car enthusiast like myself," said Alex Shen, Calty's Studio Chief Designer. "Our team was heavily influenced by Toyota's sports car past, especially Celica and Supra, and we sought to capture some of that history. It is an aggressive, track-focused sports car concept with a presence that has been amplified for shock and awe."

The FT-1's audacious design represents the pinnacle of Calty's 40th year of operation. Guided by the Toyota design ethos of Vibrant Clarity, a unique fusion of both emotional and rational factors that delivers a more exciting and dramatic design expression with unique Toyota identity, the concept is a spiritual pace car for Toyota Global Design. The goal of this ideological shift is to develop future generations of products that better connect emotionally with Toyota's global consumer base.

Traditionally, Toyota's design decisions have been driven by consensus among a large group of stakeholders. Under Akio Toyoda's stated directive to invigorate Toyota products with energy, passion and "Waku-Doki" (translation: a palpable heart-pounding sense of excitement), the approval process has been streamlined. This new approach aims to produce cars that connect more deeply with customers, generating a more satisfying ownership experience that complements Toyota's legendary reputation for quality, dependability and reliability.

"Function-sculpting" design language yields curved, muscular, expressive body forms seemingly shaped by the wind. Inlets, ducting, and vents are features of the exterior design that help reinforce its track–ready nature with elements of purposeful airflow management. At higher speeds a retractable rear wing deploys and tilts forward to create additional downforce. The body's athleticism is expressed with taut surfaces and dramatic fender forms that seduce the eyes when covered in an unapologetically red hue.

The front engine rear-wheel drive configuration locates the cockpit far rearward within the wheelbase to improve weight distribution. This design element also helps create the classic sportscar proportions one would expect from a vehicle poised to dominate even the most challenging road course. The cockpit's wraparound windshield and side glass openings are a distinct nod to the design of the legendary Toyota 2000GT.

The interior is a focused, highly functional "place of business" that locates the driver at the controls behind an F1 inspired steering-wheel. The intimate, low slung cockpit has its A-pillars set far back to help optimize cornering vision and sensation of the cabin's intimacy. A delta-shaped display zone surrounds and integrates the driver to provide an exhilarating sense of being connected to the vehicle. The cockpit's sense of minimalism adds to the purposefulness of the driver-focused environment with an emphasis on light weight components such as the composite seat covered with just the right amount of padding in only the areas that come into contact with the driver. A color heads-up display keeps the driver's attention on the road ahead, with vital information projected just above the steering wheel within the driver's line of sight.

While technical specifications do not accompany the concept, one can assume that the FT-1 represents an ideally balanced front-engine, rear wheel-drive layout that is powered by a high-technology, high performance internal combustion engine. Beneath a transparent glass hood, an ambiguous engine cover hides a powerplant left to the imagination of the onlooker.

In preparation for pitching the concept to Toyota management, Calty worked with Polyphony Digital, creators of the popular Gran Turismo driving simulator, to bring FT-1 to life in a virtual world that captured the excitement, passion and performance conveyed by the concept model. Toyota executives were offered the opportunity to take FT-1 for a timed lap around a computer-generated Fuji Speedway. Behind the wheel of the concept, Toyota president Akio Toyoda, an accomplished race car driver, completed the virtual circuit faster than his best real-world lap time at Fuji in his LFA. From that moment, he was convinced and the concept was approved to be built in model-form for the international auto show circuit.

For Toyota, this concept embodies the possibilities of the new and exciting design mission ahead. "Sports cars represent the ultimate driving expression in its purest form. As car enthusiasts ourselves, this is the kind of project we dream about working on," said Calty Design Research president Kevin Hunter. "Beyond its obvious five-alarm visual impact, FT-1 is symbolic of a new chapter for Toyota Global Design. This provocative concept truly captures the passion, excitement, and energy of the Toyota we are evolving into and embodies elements of the emotion and performance that Toyota will imprint upon future production designs."
About Toyota
Toyota, the world's top automaker and creator of the Prius, is committed to building vehicles for the way people live through our Toyota, Lexus and Scion brands. Over the past 50 years, we've built more than 25 million cars and trucks in North America, where we operate 14 manufacturing plants (10 in the U.S.) and directly employ nearly 40,000 people (more than 37,000 in the U.S.). Our 1,800 North American dealerships sold more than 2.3 million cars and trucks in 2012 – and about 80 percent of all Toyota vehicles sold over the past 20 years are still on the road today.

Toyota partners with philanthropic organizations across the country, with a focus on education, safety and the environment. As part of this commitment, we share the company's extensive know-how garnered from building great cars and trucks to help community organizations and other nonprofits expand their ability to do good. (NYSE:TM)