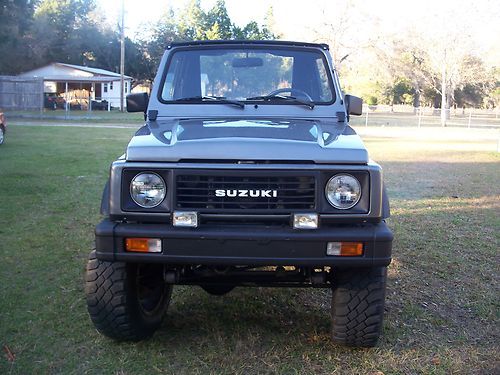 UP FOR AUCTION IS MY 86 SAMURAI 4X4 DIESEL, CUSTOM PAINT, NEWER TIRES AND WHEELS, NEW TOP,ALSO COMES WITH BIKINI TOP NEW BY BESTTOP, RUNS AND DRIVES WELL TOP SPEED OF ABOUT 55MPH,THIS SAMURAI IS IN GREAT SHAPE BUT STILL NEEDS A FEW THINGS,  FUEL TANK NEEDS TO BE REPLACED AS IT IS DIRTY PICKING UP JUNK IN FUEL FILTER, TRANSFER CASE POPS OUT UNDER A LOAD BUT WORKS IF YOU HOLD HIGH AND LOW RANGE WORK FINE  OTHER THAN IT POPING OUT,HAS NEW XAUST SYSTEM FROM MANIFOLD BACK , ALL LIGHTS TURNSIGNALS, HEATER WIPERS, IN WORKING ORDER, I HAVE TRIED TO DESCRIBE THE SAMI AS ACCURATE AS POSSIBLE, ANY QUESTIONS FEEL FREE TO ASK,   IT IS FOR SALE LOCALY SO I HAVE THE RIGHT TO END AUCTION EARLY THANKS AND HAPPY BIDDING      500.00 DEPOSIT THRU PAYPAL DUE WITHIN 4DAYS OF AUCTIONS END, THE REST DUE IN CASH OR CERTIFIED FUNDS UPON PICKUP