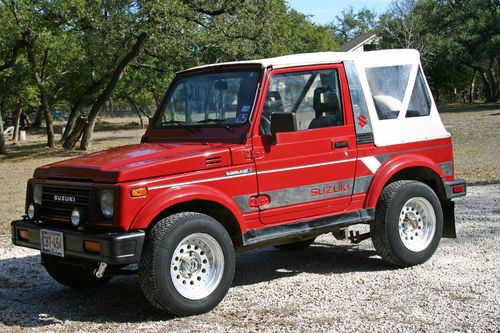 All original Red Suzuki samari 1988, two owner , not driven 4 wheeling ever, although time to time turn 4 wheels on to keep them working right, has spent most of it's life in a garage, comes with tow bar all ready to go. hood has 3 small dings, spent majority of it's  time in Texas so no rust, tires are new, do not know of any mechanical problems, happy to let anyone examine the car, both front seats have about two inch in length seams pulling out.Any more questions let me know. tiny 5mm star shaped on windshield happened years ago and it was repaired