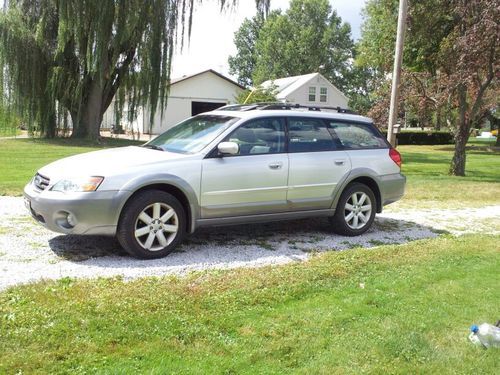 Condition: UsedA vehicle is considered used if it has been registered and issued a title. Used vehicles have had at least one previous owner. The condition of the exterior, interior and engine can vary depending on the vehicle's history. See the seller's listing for full details and description of any imperfections.Seller Notes:"Exterior: Light scratches below driver's side handle, scrape on right front bumper, hatch latch sometimes sticks."

Just a few weeks after announcing the pricing for the 2015 Legacy sedan, Subaru is getting ready to roll out the all-new 2015 Outback with a base price $24,895, plus an $850 destination charge. Like its platform-mate, the styling could be described as an evolution of the previous generation, but the company claims big changes underneath to improve comfort. It's scheduled to starting hitting dealers this summer.
The Outback continues to share most of its mechanical bits with the Legacy, including its engines. The 2.5-liter boxer-four-cylinder gets a touch more potent with 175 horsepower and 174 pound-feet of torque, and better fuel economy at 25 miles per gallon city, 33 highway and 28 combined. The 3.6-liter flat-six-engine has 256 hp and 247 lb-ft and also sees a marginal economy improvement at 20/27/22. All models now come standard with a CVT, and Subaru's Symmetrical All-Wheel Drive gets some improvements with standard Hill Descent Control, Hill Start Assist, Active Torque Vectoring and X-Mode, a system to increase traction when needed.
The base 2.5i trim goes for $25,745 (all prices after destination), up $425 from last year's CVT base model. It comes standard with a 6.2-inch touchscreen infotainment system with a USB port and AUX input. The 2.5i Premium trim retails at $27,845, but the upgrade nets buyers dual climate zones, a 10-way power driver's seat, leather-wrapped steering wheel, all-weather package and a 7-inch infotainment system. The 2.5i Limited costs $30,845 and includes leather upholstery, 18-inch wheels, a 12-speaker stereo, heated rear seats, lane change assist, rear cross traffic alert and a power tailgate. The top The 3.6R Limited trim is $33,845 and in addition to the bigger engine features HID low-beam headlights and stainless steel dual exhaust tips.