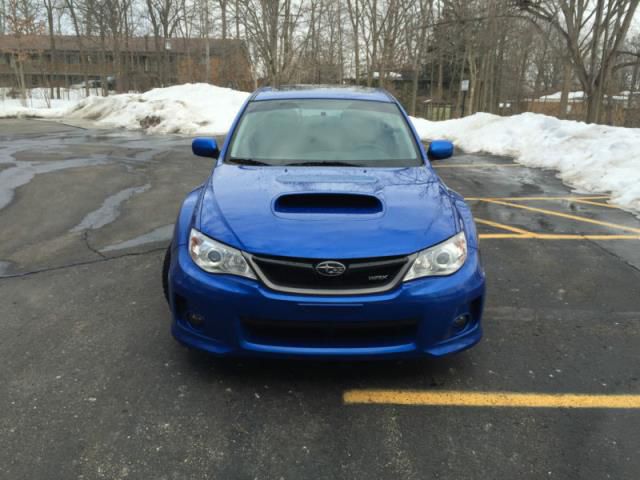 2014 Subaru Impreza WRX Premium Hatchback This is an almost-new Subaru Impreza WRX. It's the last model year that has the hatchback and is in the iconic World Rally Blue that brought the Subaru name to fame. With its AWD and winter tires, the winter was a breeze. Car is still under warranty until 36,000 miles or April 2017.The car is almost entirely stock except for a couple superficial options. Interior LED lights, window tints (lifetime warranty from A2 Customs), and rear tail light vinyls. This car has never been tracked or raced in any fashion. Adult owned and maintained on schedule - I have all the service records.

For a company that does a pretty great job of tying its vehicles to the environment - or, better said, to people who like to actually get out into the environment - Subaru hasn't exactly been a leader in green vehicle production. In fact, it's 2013 and the company is finally releasing its first-ever production hybrid, the XV Crosstrek Hybrid. Tom Doll, Subaru's executive vice president, admitted as much at the unveiling today at the New York Auto Show: "We at Subaru were not the first to market with a hybrid, but we sure made sure we did it right."
That may be, but for now the automaker doesn't want to tell us all the details of how right it is. We do know that the powertrain takes Subaru's 2.0-liter boxer engine and adds in a 13.4-horsepower electric motor and continuously variable transmission. All-wheel drive will be, of course, standard, and Subaru promises the XV Crosstrek Hybrid will offer the "same utility and versatility as the gasoline model," including 8.7 inches of ground clearance. The hybrid does weigh 300 pounds more, though, which required a re-engineered chassis.
The motor can move the lifted Impreza in all-electric mode up to 25 miles an hour (distance not specified). Subaru isn't talking precise fuel economy numbers, either, just that it will be the "most fuel-efficient all-wheel-drive crossover in America" and will unsurprisingly have start-stop functionality. We do hear, though, that the hybrid will get around 10-percent better fuel economy than the standard gas-only XV Crosstrek. The most efficient version of that car, the one with the CVT, gets 25 miles per gallon in the city, 33 highway and 28 combined. Whatever this hybrid XV Crosstrek gets, we expect Subaru'll sell a million in Portlandia. For more, scroll down to watch an official video and read the press release.

It's not every day that a Subaru and an Audi can be reasonably compared head-to-head; the two brands tend not to compete directly in their respective segments. However, the latest WRX STI and the S3 Sedan offer the perfect chance to find out if the working-class Scooby can beat its upper-crust competitor.
The UK's Auto Express gets behind the wheel of these two all-wheel drive performance sedans, or saloons as the Brits call them. Across the pond, both of them are rated at an identical 296 horsepower, but the Subaru edges out the Four Rings on torque. Like in the US, British buyers have to pay a little more to get the Audi, but it comes with a nicer interior and more brand cachet, if that means anything to you.
The video starts out with a fairly standard road test comparing the two of them back-to-back - all fairly subjective. But then Auto Express takes the trip to the drag strip, and the results there are much more conclusive. There's a definite winner when they cross the line, but you have to scroll down to see which of these turbocharged models with rallying heritage wins out.