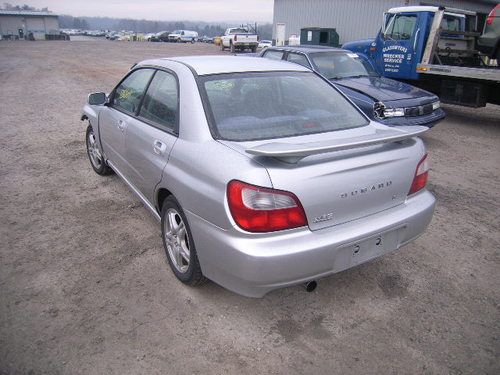 NOTE THE CAR IS SALVAGE BUT RUN DRIVE GOOD

AS YOU SEE IN THE PIC NEEDS FRONT HEADLIGHT AND BUMPER
*rs model
*2.5 engine
*automatic
*loaded with all power options
*151k miles
*all wheel drive
*very clean all around
*runs and drives excellent AWD

As you read these words, we're putting together our full First Drive report on the 2015 Subaru WRX STI. And back in December, we were given our first shot behind the wheel of the wingless 2015 Subaru WRX. Both cars will launch at the same time, hitting dealers this spring, and Subaru has now confirmed that pricing will start at $26,295 for the standard WRX, and $34,495 for the hotter STI, with both models subject to a *$795 for destination fee.
On the WRX, that price gets you a 2.0-liter turbocharged four-cylinder engine good for 268 horsepower and 258 pound-feet of torque, mated to a six-speed manual transmission. There are three trim levels available - base, Premium and Limited - the latter of which will retail for $28,495 and $29,995, respectively. Premium and Limited models are also available with a new continuously variable transmission (it isn't bad - seriously), and the two-pedal setup adds $1,200 to the sedan's bottom line. Premium models add things like heated seats and mirrors, a sunroof, foglamps and a rear spoiler. The high-zoot Limited trim adds leather seating, a power driver's seat and automatic LED headlamps.
And then there's the STI, which, at $34,495, carries the same base price as the previous model. Like the standard WRX, the STI is a sedan-only affair, but boasts extensive chassis and powertrain upgrades (stay tuned for our full drive report next week). Under the hood is a turbocharged, 2.5-liter boxer-four, producing 305 hp and 290 lb-ft of twist, mated exclusively to a six-speed manual transmission.