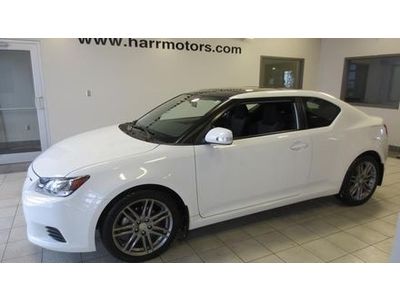 Scion certainly isn't afraid of taking a step into the bizarre at this year's SEMA Show, with at least two concepts that are probably the last thing you would expect from the brand.
First, the company is taking a step back into the 1970s heyday of custom vans with the Scion x Riley Hawk Skate Tour xB seen above. It's painted in an eye-popping shade of orange with an oh-so-retro white, yellow and card red stripe running down both sides. The fenders are connected by a streak of brown, and there's a pop-up skateboard holder on the roof in a matching color scheme to the rest of the body. The Cragar-look wheels trimmed in raised white letter tires and the throwback mirrors really sell the period look. The interior is similarly decked out in disco-era touches like shag carpeting, woodgrain trim and brown leather. In a nod towards the modern, there's a Pioneer media center in the back.
If the xB is too sunshine-feel-good for your style, then the Scion x Slayer Mobile Amp tC goes for an angrier vibe, with inspiration from the heavy metal band Slayer. The exterior is inky black with airbrushed skulls running over each side and the band's crossed-swords emblem on the hood. The motif is carried to the wheels with their blade-shaped spokes. When the custom's suicide doors open, you find a massive Pioneer sound system with a tower of speakers inside that should be loud enough to deafen anyone tempted to turn it up to 11.