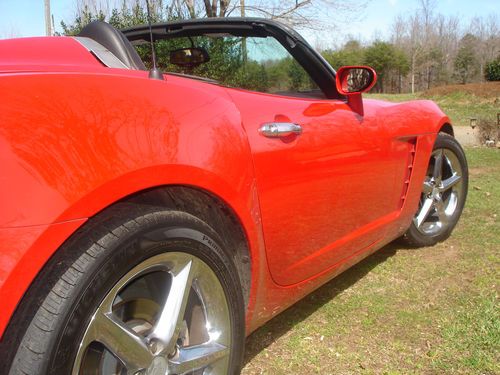 WE ARE SELLING OUR 2007 SATURN SKY, IT HAS A 2.4 LITER ENGINE, 5SPEED TRANSMISSION, POWER WINDOWS, POWER MIRRORS, POWER DOOR LOCKS, DRIVING LIGHTS, FOG LIGHTS, KEYLESS REMOTE ALARM SYSTEM, KEYLESS ENTRY TO DOORS AND TRUNK, 2 REMOTES, LEATHER INTERIOR, TILT LEATHER STEERING, WITH FINGERTIP CRUISE AND RADIO CONTROLS. ON STAR AND XM READY 6 SPEAKER MONSOON STEREO, 2 CENTER CONSOLE CUP HOLDERS, 1 SIDE POP OUT CUP HOLDER, DASH AND CENTER CONSOLE STORAGE, FRONT AND REAR SEAT POCKETS, AUTO SENSOR HEADLIGHTS, FRONT AND REAR DISK BRAKES, DRIVER AND PASSENGER AIR BAGS, FACTORY FLOOR MATS, AIR CONDITIONED, 18 INCH CHROME WHEELS, NEW MICHELIN PRIMACY MXV4 TIRES, SIZE 245-45R18-96V[60,000 MILE WARRANTED],, THIS IS A GREAT RUNNING AND GAS SAVER CAR,, 30 MILES TO THE GALLON,, WE ARE SELLING THIS BECAUSE OF A HIP INJURY.. THE BUYER WILL HAVE TO ARRANGE FOR PICKUP OR LOCAL PICKUP ONLY.. IF YOU HAVE ANY QUESTIONS PLEASE FEEL FREE TO ASK,,OR NEED ADDITIONAL PICTURES..THIS VEHICLE IS BEING SOLD AS IS,, WHERE IS NO WARRANTY EXPRESSED WRITTEN OR IMPLIED,,BUYER IS RESPONSIBLE FOR ALL SHIPPING AND PICK UP CHARGES.,,,,SELLER REQUIRES A 500.00 NON REFUNDABLE DEPOSIT FROM AUCTION WINNER IMMEDIATELY FOLLOWING THE END ON THE AUCTION, AND THE REMAINING FUNDS ARE DUE BY CERTIFIED CHECK OR CASH, OR OTHER AGREED UPON METHOD WITHIN 7 DAYS OF AUCTION CLOSE,,THANKS FOR LOOKING,,