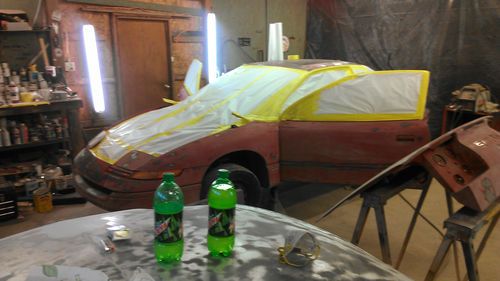 The car has had a lot of work done to it and all new parts can be verified. I'll start with the front and work back. Here's your parts list. Radiator, Cooling Fans, Radiator Hoses, Water Pump, Thermostat, Timing Chain and Gears, Brake Pads and Rotors (front only), Both right and left Wheel Bearings, Both right and left CV Axles, Plugs and Wires, Air filter, The motor was replaced in July of 2012 it had 63,000 miles at the time I put it in. The reason the motor was put in was due do the fan switch failing on a trip causing the car to over heat and wasting the motor. The temp gage didn't work when I got the car so I replaced the sensors for both. I also put in a set of manual gauges to make sure it didn't happen again. While the motor was out I replaced the clutch pack and all seals in both motor and transmission.  The A/C compressor is new as well as all belts, Lower control arms with ball joints both right and left and both outer tie rods ends, All four tires were replaced in Aug, 2012 50,000 mile warranty on them. The Eagle five star mags are brand new as well. I am putting up a lot of pic's of this car showing the new paint job just put on by me in Jan, 09 2013. The entire exhaust from the manifold to the rear end is less then a year old. Now what the car needs. The carpet, floor mats. Power motor for the sun roof. The interior isn't as nice as the outside. Needs work. This car is a daily driver its fun to drive and I have had it all over the country. It still gets 40 to 42 on the hwy and 35 to 37 in town, depends on how you drive it. If you want to know anything you can E-Mail me at kellar26101@gmail.com.