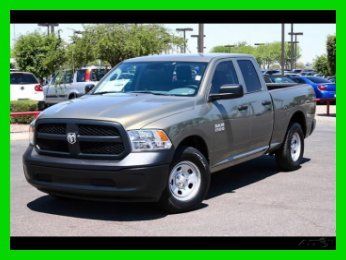 To better go after the work truck market that its rivals Ford and General Motors have dominated for some time, the Ram Truck brand of Chrysler is starting a new sub-line of work vehicles called Ram Commercial. Rather than carrying the full Ram Commercial name, each model in the new lineup would wear the Tradesman trim level, which means that the Ram 1500 Tradesman is disappearing for retail buyers only and will still be available for commercial or fleet buyers.
The Ram Commercial lineup will consist of current products like the Ram 1500 Tradesman, Ram Heavy Duty Tradesman pickups and chassis cab trucks, and the Ram C/V Tradesman cargo van, but it will also be adding a new full-size van called the 2014 Ram ProMaster Tradesman based off the Fiat Ducato. It also looks like Ram Commercial will be getting a smaller van from the Fiat Professional brand to go up against small cargo-friendly vehicles like the Ford Transit Connect and Mini Clubvan, but we can't tell if this new model is based on the Fiat Scudo, Doblo and Florino.
Ram Commercial buyers will also benefit from the BusinessLink and "On The Job" programs. Both programs make it easier for businesses to purchase and maintain their fleets.