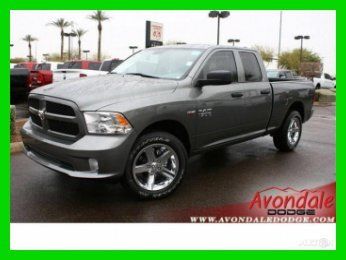 Motor Trend has named their 2013 Truck of the Year, and this time, the coveted honor goes to Chrysler's 2013 Ram 1500. The Ram unseats the Ford F-150 pickup from Truck of the Year with a package that the magazine argues fulfills owners' needs for everyday usability as much as worksite utility.
MT points out that the 1500's available air suspension is a quantum leap in the light-duty pickup segment. This system can raise for more ground clearance or lower for highway driving. Chrysler has been pushing for friendly daily-driver manners for some time now - you'll recall it debuted coils in place of rear leaf springs in the 2009 Ram 1500, back when it the truck was sold under the Dodge nameplate. The new optional air setup is another step towards more comfortable everyday driving.
The Ram 1500 can also be paired with the company's 3.6-liter Pentastar V6 in place of the loveless 3.7-liter unit, in the process getting some pretty surprising fuel economy figures. MT also notes that the interior update - complete with available Uconnect 8.3-inch screen and new rotary shifter - is a welcome upgrade. These attributes have conspired to yield a deserving award for Team Ram, which MT says has nailed the motivations of light-duty truck buyers - comfort and capability in one package.