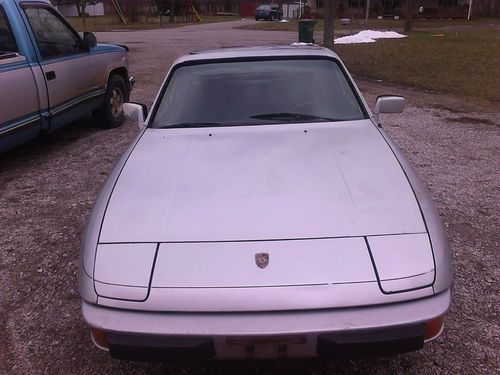 Offering for sale as is, where is. I have a porsche 924 non turbo. I originally bought this car for my Daughter but she has decided she wants something else. This one has to go before she can purchase something different. The 1981 model is the rarest of the 924's produced, total imports to the US were 2155 cars. Here is a link to the NADA price guide for this car http://www.nadaguides.com/Classic-Cars/1981/Porsche/924/2-Door-Coupe/Values

I just put 4 new tires on this car and it has not been driven 1 mile since putting them on. The old ones were starting to weather crack. I dont have license or insurance on this car so I took the rims off and hauled them to the tire shop. The only time they have hit the road is out of the driveway and into my cul de sac. The car has new side windows and a new front windshield. Some neighbor kids shot them out with a BB gun and were caught in action. Their parents paid to have them replaced with new. The passenger side door window is off the track for some reason and I haven't had time to take the car back to the installer. I'd have to load it on a trailer and haul it back down to fix it. It rolls up and down fine but leans toward the rear when rolling it up, you have to level it out by hand then roll it all the way up. It also has a new battery purchased last summer.

The paint is decent and there are minor dings and dents. The only real dents can be seen in the video's. One above the right rear wheel and one on the right front fender. Neither of which appear creased, should pop out. The driver mirror is loose, has to be taken off and tightened.

This is a 32 yr old car so perfection isn't gonna happen. There are various small issues to be expected with a unrestored car of this vintage. That being said this is one of the better unrestored 924's you will find. Runs good, steering tight and rides good. Reminds me of driving a go cart on steroids.

The engine runs well and sounds well. Transaxle shifts good and firm, clutch is good. The rear wheel cylinders started leaking a few Months ago. I installed new shoes and wheel cylinder kits. I did not have a .750 hone so I put the kits in without honing the cylinders. Guess what, they leaked again. Good thing is it has not been driven since so the kits probably are still good. Should just have to take them back out and hone the cylinders. Before they started leaking the brakes worked great. As you can hear in the video it has a belt squeal. I had not messed with this car since back in the summer so the battery was low. Cold here and the belt started squealing when I turned on the heat. Guess charging a low battery and running the heat was too much for a worn out belt. I wasn't gonna tighten it just for a video. It was 20 degrees outside. The AC worked last time it was used but the belt came off and has never been put back on. Everything is there except the belt.

The interior is like most cars of this age. Worn and faded. Everything except the tach is working. You can see in the video that the speedo is sticking out. I put in a new speedometer cable when I did the brakes. After the brakes were found to still be leaking I never finished putting the speedo in right. Kinda aggravated that day and just left it alone.

Basically it is a 32 yr old sports car that runs and drives well. Needs a little TLC to be perfect. If you were looking for a restoration car this would be a perfect starting point. Looking for a daily driver here it is. These cars offer performance and handling along with a advertised 35 mpg highway.

This is located in Oakwood, OH 45873. Beware, there are 3 Oakwoods in Ohio. Look up the zip, we are in NorthWest, OH close to Paulding. The car is out in the driveway if you want to come look and hear it contact me.

Available for local pick up. Except for the leaky brake cylinders it is road worthy. You can fill the master cylinder and it takes a fewdays to leak down. You could probably drive it home. If you want it shipped you will have to make all of the arrangements. Due to my work schedule I can't help you out with shipping.

I've included links to youtube video's of this car that I took today. These video's should answer most questions but if you have any others ask and I'll try to answer.