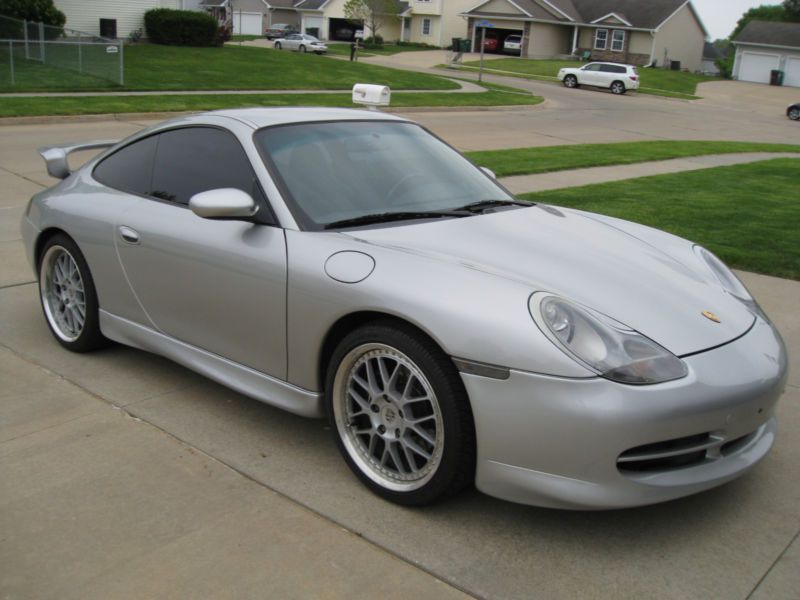 For more pictures email at: rachellerggrise@ukshoppers.com .

1999 Porsche 911 Aero. Besides having ultra low miles (41k), this car came with MANY
rare options from the factory. Below are the factory options for the car:
XAA - Aerokit
XRB - 18" SportClassic 2-peice wheels (No longer with car, car includes 19" Champion Wheels.)
XSA - Sports Seat Backrests Painted In Car Color (Silver)
X47 - Carbon Gear Lever Knob
X54 - Stainless Steel Tailpipes
X58 - Carbon Handbrake Lever
X70 - Stainless Steel Door Entry Guards With Logo
X71 - Alu-Look Instrument Faces
X77 - Carbon Steeling Wheel
139 - Seat Heating, Left
220 - LSD Limited Slip Differential (RARE, option only available in 1999)
222 - Traction Control
224 - Automatic Limited Slip Differential (Traction Control)
234 - Tyre Code
340 - Seat Heating, Right
375 - 2-Way Electrical Sports Seat, Left
376 - 2-Way Electrical Sports Seat, Right
446 - Wheel Caps With Colored Porsche Crest (No longer with car)
490 - Sound System
571 - Activated Charcoal Filter
680 - DSP Digital Sound Processing
983 - Leather Front Seats
09981 - Exclusive Program Part Installation
09991 - Exclusive Program
Besides all the factory options, there have been a quite a few other things added to make this car even more unique
and exotic.
Built in K40 Radar Detector
Litronic (Xenon) Headlights
Smoked LED Tail Lights
LED License Plate Lights
Smoked Side Markers
19" Staggered (8.5" Front, 10" Rear) Champion RG5 Multi-Piece Wheels.
Fister D Exhaust (Muffler replacement which makes the car sound AMAZING)
K&N Drop In Filter With Aftermarket Intake Hose
Painted Rear Bumperettes
This car is in excellent mechanical condition and everything works. This is a great looking car. It is over 15
years old, and once you get closer than 10 feet, it does have some imperfections. On the outside there is a
scratch on the drivers headlight and a small crack in the front bumper. The car does have a few scratches,
including by the Porsche crest. The wheels could use a good Polish, on the lips especially. On the inside, while
being in good shape, the bolster of the drivers Sport Seat is worn, and like all these 996 Porsches, the Carbon
Fiber pieces have cracks in the clear coat.