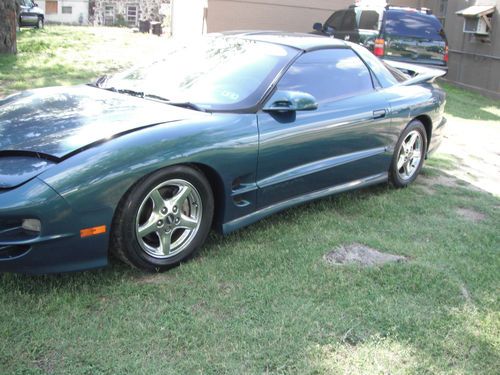 Up for bid is a 2000 Pontiac Trans Am.  This car was a new car trade at one of the local dealerships.  Car is in ok condition with some visible wear as you can see in pictures the paint has a few blemishes and the clear coat is coming off in certain areas especially on roof.  This vehicle is equipped with T-tops and Leather.  The driver seat will need to be recovered as it has multiple tears.  The car sounds great and drives good the gears are a little hard to get into initially but once the first gear it's in the rest all go in gear great with no grinding or anything.  Overall the car ran great the car looks to be lowered and so when you are driving and hit a small pothole there is a noise coming from right rear sounds like the car is so low that it just bottoms out.  As for performance the vehicle has an SLP intake, Long Tube Headers and SLP Exhaust from what is visible vehicle was never put on lift so don't know if any other mods are done other than the lowered suspension.   This car would make a great fixer up because it's only a few hundred dollars away from looking and driving great.  I'm describing vehicle as good as possible so there is no misunderstandings.  So PROS: vehicle engine runs great, SLP Intake, SLP Exhaust, Nice Stereo     CONS: Leather on Driver seat,  Dash cracking in areas, Lowered suspension makes noise in right rear and paint has flaws, and the Transmission is a little hard to put in gear initially might be ready for clutch.  Overall still a very nice car and I give it a 6 out of 10 so bid with confidence.  Winning buyer is responsible for all tax fees and a 125 dollar Document Fee.  Buyer is also responsible for arranging delivery of vehicle.   Thank you and happy bidding...