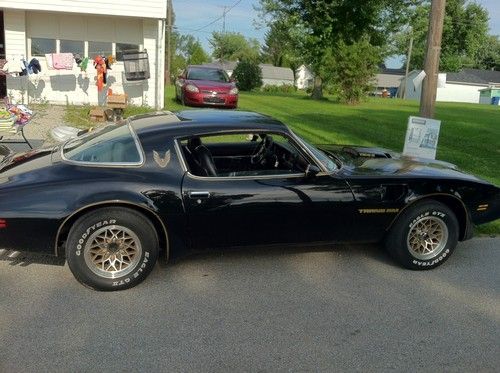 Condition: UsedA vehicle is considered used if it has been registered and issued a title. Used vehicles have had at least one previous owner. The condition of the exterior, interior and engine can vary depending on the vehicle's history. See the seller's listing for full details and description of any imperfections.Seller Notes:"Does need a door handle on the drivers side and need paint touch up on front left bumper.Some Decals are starting to peel, but I will include a NEW decal kit."

Runs and Drives Great 6.6L Engine
Solid car
Title in hand
Newer Tires
Does need a door handle on the drivers side and need paint touch up on front left bumper.
All new interior from head liner to carpet.
Solid frame and rails
Some Decals are starting to peel, but I will include a NEW decal kit.
Please ask if you have any questions prior to bidding.
Car will be sold as is. It has the original 400 small block Pontiac motor. I restored this car from the frame off. I bought everything new when I restored it. Only a few parts where reconditioned. Please call me for any questions on the car. This car is very solid didn't need to replace any metal at all.