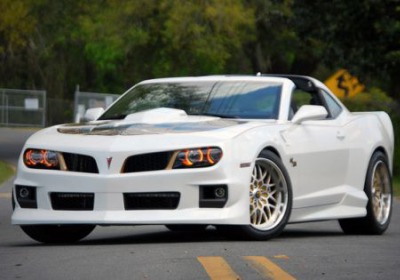 No, you didn't read our title wrong. This is a 2013 model year Trans Am, and yes, that is a Pontiac logo affixed to the front of the car. But don't bother dialing up your local General Motors dealership just yet. This is the new Hurst Edition Trans Am created by the Trans Am Depot located in Tallahassee, FL. Having spent a number of years restoring early Trans Am models, the crew at Trans Am Depot finally did what many Pontiac enthusiasts wish GM would have done – create a modern Trans Am using the fifth-generation Chevrolet Camaro.

As the former owner of a 1977 model, I've been wanting to check out Trans Am Depot ever since I first saw the company have American Choppers build a trio of motorcycles inspired by its Pontiac remakes. So I jumped at the chance to head to Florida's capital city to visit the shop and drive its latest creation, the new Hurst Edition Trans Am. As a collaboration with Hurst, this car made its debut at the 2012 SEMA Show and then popped up again on our radar with a cheesy yet perfectly fitting video back in March.

See also: Check out the official 2013 Trans Am Hurst Edition commercial, NHTSA could add 1M cars to GM recall, Official USPS Muscle Cars stamps coming to a mailbox near you.