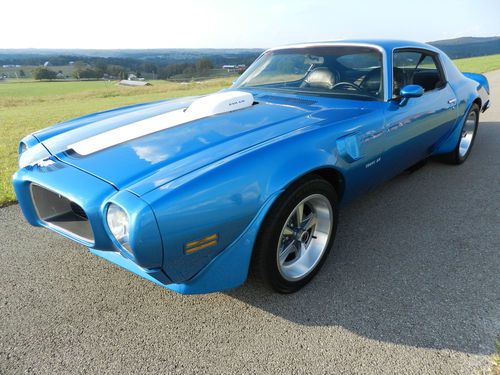 You are bidding on a 1970 Trans Am clone. Lucerne Blue with correctly painted white stripe and phoenix decal. Very nice condition inside and out.  Restored in 2006. 42,663 original mile 74 trans am 4sp car. Pontiac 400 engine, Edelbrock carb, cam and intake, Billet distributor. M20 4sp transmission, 3.73 rear end. This TA runs very strong and shifts smooth. The car is very tight, stops and handles great. Paint and body are a very picky 8 and the interior a 9 on a scale to 10 rating. All gauges and lights work like new. Lowered on YearOne Pontiac Rally ll 17x9 wheels 275/40 front and 315/35 rear to give it a nice stance and Pro Touring look. Longtube headers running into a Nascar style boomtube exhaust gives it a killer sound. The pics will do the talking for the car. This is a car you can be very proud of at any car show or cruise in, you will have the cool factor going for you. I am selling this TA at No Reserve so bid to win and don't miss out. If you have 0 or negative feedback please contact me before bidding. The car is to be paid for in full within 5 business days of auction end in the form of certified check, wire transfer or cash on pickup. I am willing to ship at the buyers expense. If you have any questions I can be reached at 606-278-3207. Thanks and good luck bidding.