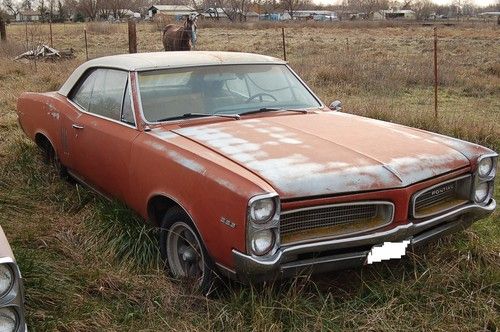 Here's a car with huge potential. I bought it to fix up, and only got about halfway done. It's a 326, and I only have a few thousand miles on it since a complete rebuild. I chose a mild performance cam, so it idles smoothly. (about 292 duration, .490 lift, roller tip steel rockers) It has an Edelbrock 4bbl performer carb that I spent a lot of time getting the jets and metering rods just right. I still have the original 2bbl Rochester 2G and manifold if you want to go back to numbers-matching condition, but if you want to do that, I'd like to have the Edelbrock carb and intake manifold back. It is a factory air conditioning car, but it needs a compressor and condenser, but the hard-to-find compressor bracket is on the engine, and all the appropriate parts are on the firewall and in the cab. The transmission is the original Super-Turbine 300 2-speed, and it runs well and shifts smoothly. I also completely re-wired the car (with the exception of the trunk harness) with a perfect match of the original from M&H Electric. I put a new molded carpet in from Year One as well. Because it's been sitting the headliner is starting to fall apart, but if you exercise the "Buy-It-Now" option, I will install a new headliner for you before you pick it up. Basically it's an unmolested original. The bad news is a few years ago I was rear-ended on the side of the freeway when I stopped to help at the scene of an accident. The driver's side quarter panel and bumper are munched, but it still drives fine and tracks straight. I drove it to work for a while after that, then parked it when I got married, and now the wife wants me to "thin the herd". The good news is that the winner of this car gets included in the deal, a 67 Tempest parts car to go with it. That way you have a donor to repair the rear end. The parts car has a straight bumper and quarter panel that could be pasted right into this Le Mans. Also, someone before me put the wrong header panel and grille pieces in, so from the front it looks like a '66. The parts car also has the correct header panel, good grille inserts, and even a spare set of fenders and a good hood for "just in case". The parts car does not have a rear-end, but I can help load it with my tractor. I can deliver for a small fee within a couple hundred miles or so, upon prior arrangement.