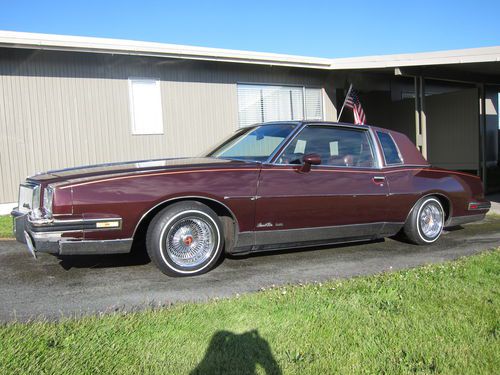 1984 Pontiac Grand Prix LE. 350 V8 with new Edelbrock carburator and battery. Odometer shows 50k but not exactly sure what the actual milage is. Car runs good once it's warmed up but hates the cold, probably could use a tune. Body is in decent shape but could use new paint. There are chips and flaking on the paint. Also the front bumper is cracked on the driver side. Interior is clean, only flaw is the drivers seat back has a couple of hole in it. Car has a Hi Low hydraulic set up with 6 batteries and 4 switches, does front, back, side to side. Rims are china knockoffs but look ok. Extra set of rims included and battery charger. This car is in good shape for a lowrider at a low price and with a little tlc could make a really nice ride.

Email me with any questions before you bid because car sold as is.