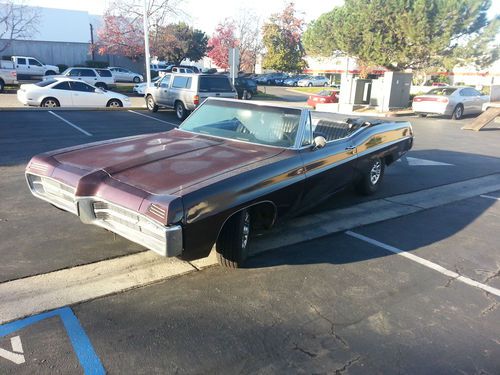 1967 Pontiac Grand Prix Convertible -  Great PCH cruiser.  I have used this car to take my kids to breakfast every Saturday morning!  It still gets looks even though it needs work. This car is sure to appreciate as only 5800 of these were ever made.
Pros
The engine is strong and has newer Edlebrock Carburetor

Newer Flow Master Exhaust (for that great sound).
Power convertible top is recent goes up and down and seals well
Desirable glass rear window
I have the rear wheel well skirts but they are not installed on the car.
All the windows roll up and down and seal
The interior is in good shape.  There is one small tear in one of the bucket seats but is not even noticeable.
Issues:
Rust.  The car requires body work.  There are rusted areas as well as areas where filler has been used.  (See Photos).  Floor and Trunk pans seem to be ok with surface rust only.
Hidden Headlight mechanism is missing.  I have some Parts but they are not installed in the car.  So I have driven the car only in the day.
This is a project car for someone who has the will and the tools to do body work.  The rear quarter panels are the main areas as is usually the case with most cars.
I am selling this car because it needs more body work than I have the desire or equipment to deal with.  Otherwise it has been a fun car.
Car is licensed in CA with clear title.  I don't have the CA plates on the car but I have them.  The car has been at the shop for the past few weeks getting serviced.
If you have questions, please contact me by email.  I will respond usually within a few minutes as I have the app on my phone.
I am interested in any reasonable offer.  I have over $8500 in to the car (not that it matters but it should give you some idea of value).  I would like to sell this quickly so I will entertain all offers.