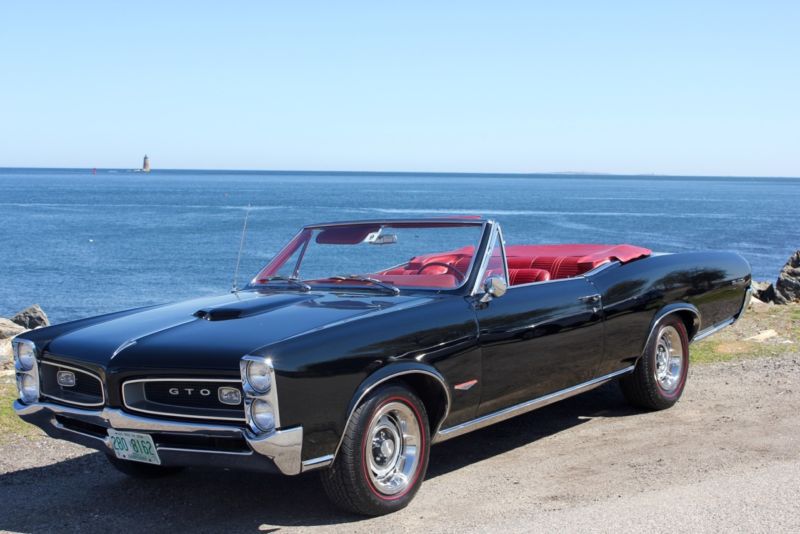 1966 Pontiac GTO convertible with original interior
It is a mostly unrestored car. Everything I have done to it is with an eye to drivability, it is returnable to
completely original in one weekend. It was painted once about 9 years ago, pinstripe removed, very limited
bodywork required - body is straight as an arrow and pictures during paintwork and reciept are supplied in the
documentation. I have provided pictures down both flanks. The interior is original and untouched, down to the
weatherstripping on the doors and original knobs and buttons. The sticker for the original owner's parking pass
from where he worked in is still affixed to the rear view mirror. The knobs and buttons have an original patina,
the headlights and brights appear to be original equipment. I have a copy of the original order sheet, original
options, owner's manual, PHS documentation, and the warranty card mailed to the original owner, Mr. James Brock of
Wisconsin who took delivery in May 1966. He was 48. It was kept by him until he was 89 years old, passing it to
his son, in July of 2007, where it was titled again in Wisconsin. The car title almost immediately passed to a man
who knew the family and had an eye on the car who lived in Kansas, that same month, so I consider him to be the
second owner. At the time, it had 67,832 miles on it. He spent over 10k on paintwork, then appeared to have a
change of heart and sold the car to me. He did not drive the car very much, as I purchased the car less than 2k
miles after he bought it and less that a year after it left the body shop with 69,522 miles. I have all paperwork
documenting this and they are photographed above. motor.