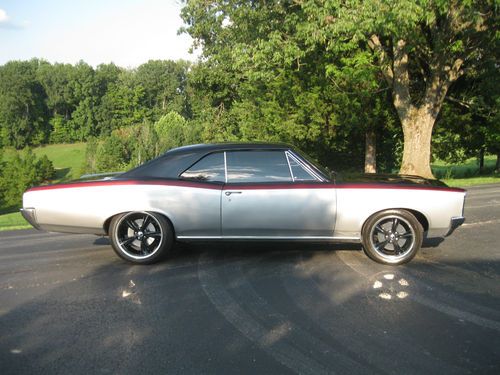 This vehicle has taken 2 years and over $40,000 in parts and restoration and Custom work.
The Vehicle has undergone an extensive FRAME-OFF Restoration with no expense spared
Included in the Build:
New Quarter Panels
New Fender
New Hood
New Radiator Support
New 7 Piece Trunk Kit
New Tail Panel
All New rebuilt Drivetrain:
1969 Pontiac 350 Fully dressed and less than 50 miles since rebuild
4 Speed Transmission
Interior
New Carpet
Headliner
Door panels
Seat Covers
Locks
Ignition
Other Notes:
The Radio is not in the vehicle as I left the discretion of original or different up to the purchaser. All the wiring should be in place for a factory original Radio. The body did not have a trim tag on the firewall when purchased. Original Color was Black as noted by the title.
Will Entertain ANY trades, preferably muscle cars or new model Pontiac's. Call me with offer, Cash boot talks! 606-688-4587 or email me at michaelspeddicord@hotmail.com