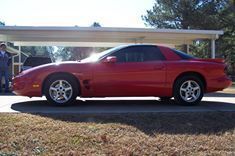 2000 Pontiac Firebird, air conditioning works great; tires purchased within the last 18 months and are still in like new condition since it was only driven to school and back daily. Non- Smoker, no burns or tears in the interior. The lock for the passenger side T-Top came off, but I still have the lock and it can be put back on.

If purchased the car will have to be picked up in person or at the cost of the buyer. Cash or cashiers check are the only payment options. Please let me know if you have any questions.