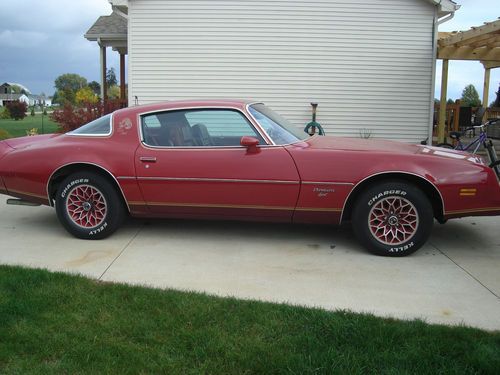 Your viewing a rare 1978 barn find Pontiac firebird Red Bird, the body and undercarriage are completely rust free on this 35 year old car, it is not perfect it does have some scratches and some dings but nothing major. The interior is in great shape except the plastic side panels have faded. The engine runs good, it could use a degreasing and a powerwash.it does leak oil from its original motor and gaskets. I was going to pull motor replace gaskets and clean and paint the engine and compartment. When i figured someone might want it just the way it is. i have put new brakes including calipers, pads and had rotors turned so it would be drivable. the steering is tight and trans shifts great. This is a very solid car and a great investment. Pontiac are not being made any more plus to have a rare bird like this. The value of this car will escalate faster due to the rareness.

I have priced this car to sell, it is very good deal at this price. When you come to get the car, if you dont like it, i will return your deposit no questions asked. I want you to see the car in person before the deal is done. i would  trailer this vehicle, the tires have great tread And look good  but i dont know how old they are, i dont trust tires over five years old and they are definately older than five  years old.

The reasons i'm selling is. Drag racing season is quickly approaching and i could use the extra room and money