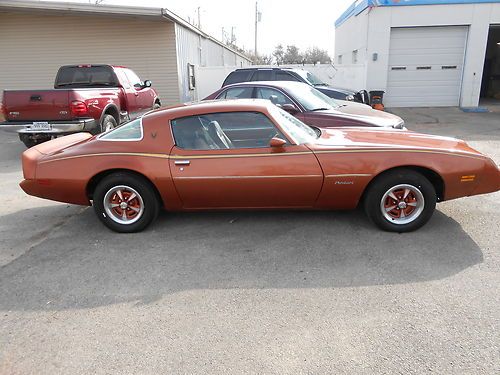 1980 PONTIAC FIREBIRD ,3.8 V-6 , AUTOMATIC ,CRUISE, A/C, 1 OWNER ALL ORIGINAL.  PICS SPEAK FOR THEM SELVES. NICE OL CAR. ENGINE IS JUNK IT RUNS BUT HAS ROD NOISE. DOES NOT SMOKE. TRANNY SHIFTS GOOD BUT FRONT SEAL IS LEAKING. STILL HAS CONVERTORS AND SMOG CONTROL. ALL GLASS IS GOOD. EVERYTHING IN TRUNK IS FACTORY. VERY LITTLE RUST, UNDERNEATH CAR LOOKS GOOD. THIS CAR HAS THE MAKINGS OF A VERY NICE RIDE. PAINT IS DECENT FOR AGE BUT WORE. STRESS CRACKS UPPER QUARTERS. FRONT GRILLS ARE ROTTEN. ASKING $4500.00 BUT OPEN TO OFFERS. YOU WILL NOT BE DISSAPOINTED . YOU ARE WELCOME TO COME BY AND LOOK AT 508 NORTH MISSOURI AVE. IN CORNING, AR 72422