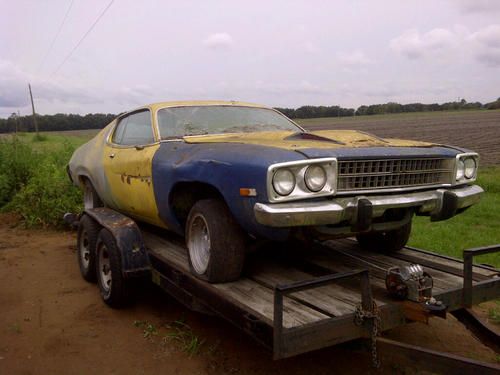 Condition: UsedA vehicle is considered used if it has been registered and issued a title. Used vehicles have had at least one previous owner. The condition of the exterior, interior and engine can vary depending on the vehicle's history. See the seller's listing for full details and description of any imperfections.Seller Notes:"parts car with title"

This is a 1973 Plymouth Satellite with a clear Florida title. I am selling this car as a parts car. The body is pretty much rusted away. But there are a lot of good parts left on it for someone else's restoration project. It has good glass except for windshield, decent bucket seats, good front bumper, good trunk lid, it has the 150 mph dash cluster, a partial console, and a good rear end. There is no motor or tranny. The wheels pictured do not go with the car, they will be replaced before the sale. If you have any questions, just ask. We can also send more pictures if you need them. Happy Bidding.