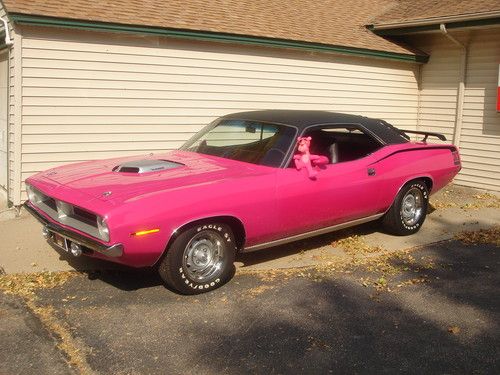 here is a ultra rare, real deal panther pink big block cuda with a 4spd, there is only 3 pink cudas with a bigger motor than a 383 known to exist ,   and only one is a 4SPD  ,,  so if u want to have one of the ultimate pink mopar cars at a car show and probably the only  4SPD  there,,, this is ur chance, and this car is loaded with cool options like super duper rare  window louvers , and hockey stripe , along with rally gauges, and power brakes,  it doesnt get much cooler and rarer than that a  reasonable price, it would cost this much to restore, so u get the car for free without any headaches, when u r ready to BUY, please call for more details and PLEASE NO emails with a hundred questions, thanks greg, 952-440-6722,, more pics at mopar ponderosa