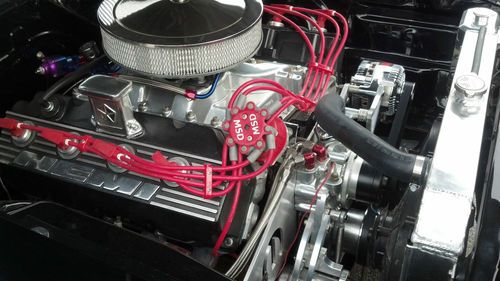 This 1973 Hemi Cuda clone is in immaculate condition. A friend of mine just finished a pain staking 3-year restoration on it. I recently purchased the car, unfortunately i had another car come in that we have been hunting for years and I am forced to sell this one.

I have $160,000 in receipts on the car and he spared no expense. It has a 472 aluminium head HEMI built by one of the top motor builders in the country with a reverse valve body 727 fully built TCI transmission with a 3500 stall speed torque converter, along with a Dana 60 rear end built by Strange Engineering. All suspension has been powder coated, QA1 adjustable shocks with coil overs, rally hood with open intake ports, it has a hand built aluminium front spoiler, and custom aluminium radiator. It has duel batteries relocated in the trunk with a kill switch, four wheel Wilwood brake system including master cylinder and full MSD ignition system. It also has Budnik 17" wheels along with a Budnik steering wheel. Painless Performance wiring system and Hotchkis sway bars and also a custom motor mount bracket. Full 3" TCI enhaust system with X pipe and TTI 2 1/4" head tube with flowmaster mufflers. It also has a custom sound system with big power!
The car runs awesome/very quick with a spotless interior.
Please feel free to contact John at (714)397-0339