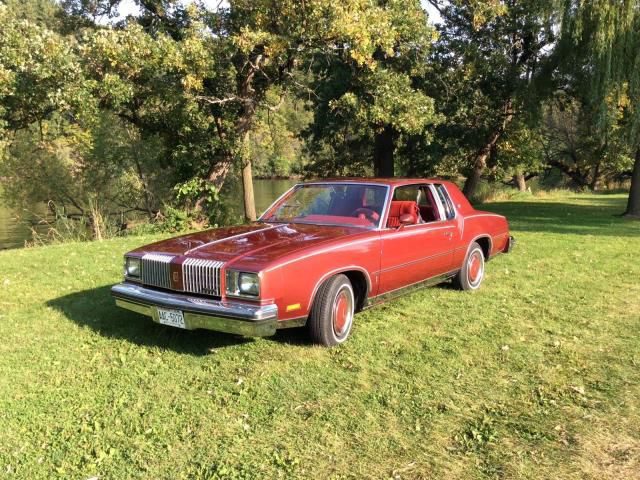 Send me questions at : fabiensmall693339@yahoo.com 1978 Oldsmobile Cutlass Calais , Two Door Five Speed Manual Transmission 260 V-8Two Barrel Carburetor. The Car Was Stored In The Garage From 1987 Until 2017. IDrop The Gas Tank And Thoroughly Cleaned It. I Had The Carburetor Put In A New Battery, New Belts And Hoses, Oil Change, Radiator Fluid,Had The Brakes Gone Through And Inspected. I Put Four Brand New Correct 14 InchTires On The Car And I Have The Four Original Tires That Were On The Car, TheyWere Firestone 721 Radials And I Will Include Them With The Car . When IAcquired The Car And Started Working On It It Had 13,250 Miles On It. Now TheCar Has 14,200 Miles On It . This Car Is Road Worthy And Is Ready To DriveAnywhere. The Previous Owner Missed Placed The Title To The Car . The Car WasIncluded With The Contents Of The Garage That I Purchased . I Went To The DmvAnd Applied For A Missing Title. They Gave Me A Bonded Title In My Name . The Bumpers AreStraight But They Will Need To Be Re-chromed Because They Have Some Pitting OnThem. The Headliner Felt Is Sagging In Some Places It Would Need To BeReattached. There Was A Box Sitting On The Trunk Lid And Something In The BoxLeaked Onto The Trunk Lid Which Caused The Corrosion That You See In ThePictures On The Truck. All The Glass In The Car Is Crystal Clear With No CracksAnd No Chips. All The Weatherstripping In The Car Is In Excellent Condition. TheCar Has Manual Windows And Locks. No Cruise Control No Tilt Steering Wheel NoAir Conditioning .