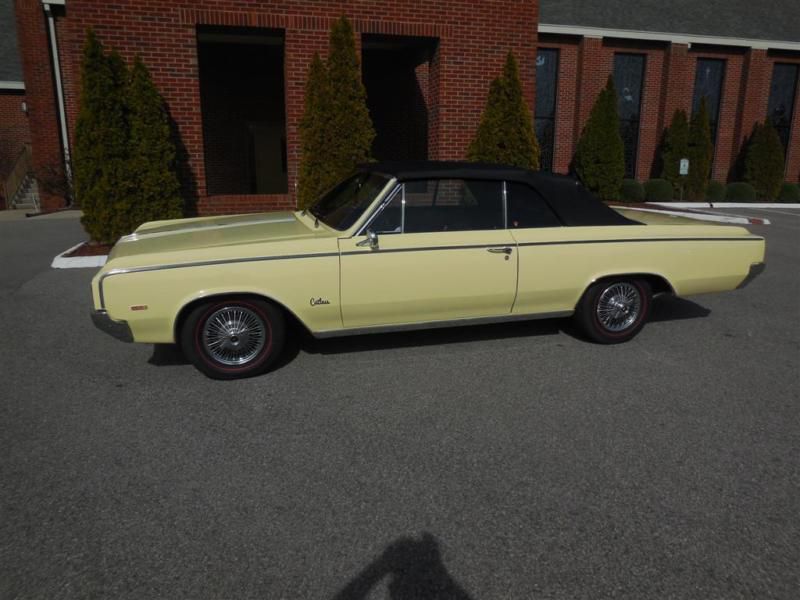 For more pictures email at: rockyrttelesco@ukgamers.net .

I have for sale a 1964 442 Convertible. It's Tahitian Yellow with a Black bucket seat interior.The B09 442 option
was announced in February of 1964 to answer the Pontiac GTO and production started in early March 1964. It has the
correct 330 CI 310 HP engine & Muncie 4 speed transmission. It also has the D code 3.55 rear axle. The engine
production sequence # is T19XXXXGB. The body/frame is very solid,the lacquer paint is very nice and straight.. The
trim/bright work is very nice with a lot of NOS parts used during the frame off restoration.. There were 436 442
Convertibles built in 1964 with approximately 20 or so known to exist.as per the December 2014 OCA Journey with
Olds magazine article for the 50TH Anniversary of the 64 442's. There were very few of these 442's with A/C,maybe 2
they knew of as per the article.. Some of the rare options on the car are, wood steering wheel, remote outside
drivers mirror, passenger side outside mirror, passenger sun visor vanity mirror, 65 442 NOS chambered tailpipes.
The interior is in mint condition as is the 4 speed console with factory mounted tachometer. It has the correct
Muncie reverse lockout shifter that works perfect. The car also has 225x70x14 BF Goodrich Redline radial tires from
Coker Tire for driveability. The OEM 2 bar spinner wire hubcaps are in mint condition. It also has NOS/mint T3
headlamp bulbs.There is a new convertible parade boot in the bag in the trunk. The car is show quality as it won a
First Place Award & the Best Of Class Award @ the most recent Oldsmobile Nationals in Kingsport,TN,July of 2016. If
this car is not the finest example of a 64 442 Convertible, it's right up there with the finest. I acquired the
car from one of my close Oldsmobile Club of America friends wife as he has passed away.. He had been an avid OCA
member from 1978 till his passing in 2013 and never missed an Oldsmobile Nationals during his time in the OCA.. I
acquired all of his cars and parts and I do not need to keep the car. The car was featured in the April/May 1996
issue of Muscle Car Review. The car also comes with a complete set of the 5 factory service manuals & a dealer
interior color & fabric album which is very hard to find. The car runs & drives as good as it looks with only 309
miles since the restoration