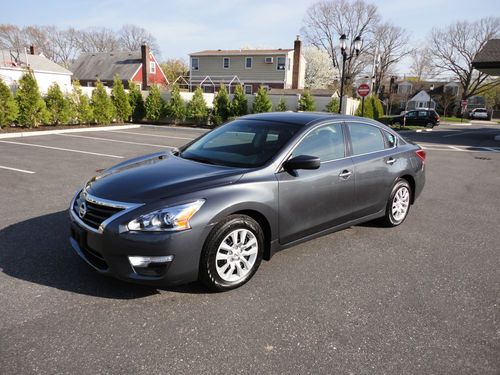 Condition: Used: A vehicle is considered used if it has been registered and issued a title. Used vehicles have had at least one previous owner. The condition of the exterior, interior and engine can vary depending on the vehicle's history. See the seller's listing for full details and description of any imperfections. ...
Hello, PLEASE READ VERY CAREFULLY. This is a salvage title vehicle so bid on knowing what you are getting.......... Out of the country bidders, Please E-mail me first before you bid. Thanks and good luck!!!
This is NOT a flood car
You Are Looking at a beautiful New body style 2013 Nissan Altima S 4cyl 38mpg Car had very minor damage at the dealership. light dings and a few scratches that is it.. Its straight clean with all original paint. Runs/drives everything works like new so bid with confidence this is a new car and needs Nothing... Again This is NOT a flood car..
Sorry pictures are so blurry i can assure you that this car is super shinny in person..
CALL ME IF YOU ARE SERIOUS 516 852 2424
Please keep in mind and fully ((understand)) that this a salvage vehicle  So please bid on knowing what your buying. If you don't understand what I'm saying email me before bidding......
If you have any questions or you feel like I missed something good or bad big or small please email me. I'll be happy to answer any questions as honestly as possible. Car is located long island NY 11758. I can locate a shipping company anywhere around the world for a fair price. I'm a fair and very easy going person I will do whatever it takes to make my costumers happy.. Thanks so much for looking and good luck!!!
New York Buyers must pay sales tax. All other states no sales tax is required. Thanks
If you would like to make a Best Offer Please read the Ebay rules>>
Best Offer gives you the chance to negotiate the price with the seller. The advantage of a Best Offer is that you have the opportunity to buy the item at a lower price than the Buy It Now price or, on eBay Motors, the Advertised price.
There is no minimum Best Offer price. However, you should only make what you consider to be your "best" offer for the item because any seller who receives multiple offers for an item is likely to accept the highest Best Offer. Best Offers are good for 48 hours. If the seller accepts your offer, the listing is immediately closed.
Only submit a Best Offer when you’re serious about purchasing the item. Like the bids made on auction-style listings, your Best Offer is legal binding. If your offer is accepted by the seller, you are obligated to pay for that item.
If you make me a fair offer and you email me with a guarantee of a fast payment transaction i will guarantee it...