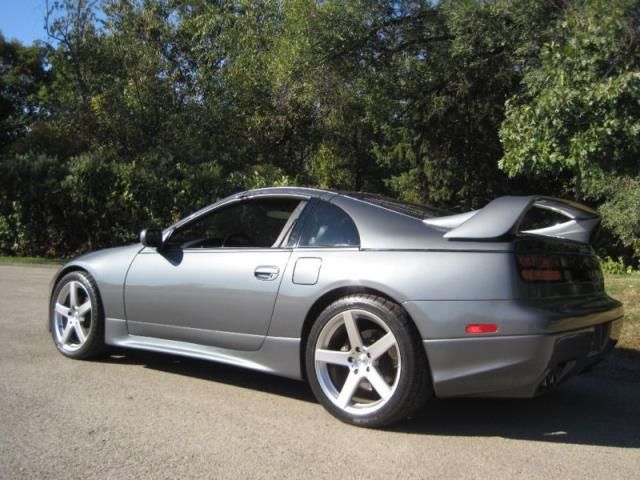 THE LAST YEAR 1996 NISSAN 300ZX TWIN TURBO STILLEN SMZ EDITION WAS THE AUTO MAGAZINE UNANIMOUS CHOICE FOR CAR OF THE YEAR AND BEST SUPERCAR UNDER 100,000 IN 2010, THIS EXCEPTIONAL HIGHLY OPTIONED 300ZX TWIN TURBO 5 SPEED COUPE WAS PURCHASED BY A PRIVATE COLLECTOR - HIS MISSION, TO BUILD A CAR THAT WOULD HAVE MORE IMPRESSIVE APPEARANCE AND BETTER AERODYNAMIC DESIGN THAN THE LAST YEAR SMZ - STYLING THAT WOULD MATCH THE INCREDIBLE PERFORMANCE - THE EXTENSIVE PROJECT CALLED FOR THE ENTIRE VEHICLE TO BE REDONE - THE EXTERIOR WOULD UTILIZE THE LATEST VERSION STILLEN BODY COMPONENTS, WHICH WERE MORE ADVANCED AERODYNAMICALLY AND IN STYLING THAN THE '96 SMZ, PLUS ADDITIONAL CUSTOM TRIM PIECES - THE VEHICLE TO BE DONE IN SILVER GRAPHITE METALLIC - HEFTIER ALLOY WHEELS WITH HIGH PERFORMANCE TIRES INCLUDED - THE INTERIOR REDONE IN MATCHING COLOR CODED SILVER GRAY AND GRAPHITE - THE ENGINE POWER BOOST, ACHIEVED WITH ADDITION OF PERFORMANCE CHIPS, INJECTORS, FREE FLOW INTAKE AND SPORT EXHAUST - SEVERAL MONTHS LATER, THE CUSTOM SHOP HE CHOSE, ROLLED OUT THE FINISHED VEHICLE - TOTAL COST FOR THE VEHICLE AND THE CUSTOM BUILD EXCEEDED 45,000 - YOU ARE VIEWING THAT ONE OF A KIND CUSTOM Z, OBTAINED FROM THE ESTATE OF THE PREVIOUS OWNER - THE VEHICLE NOW DELIVERING THE STYLING AND SPECTACULAR PERFORMANCE OF A TOP LINE EXOTIC, WITH THE COMFORT MOST EXOTICS DO NOT OFFER - IF NISSAN HAD BUILT THIS CAR, THEY MAY HAVE JUSTLY CLAIMED "THE ULTIMATE DRIVING MACHINE" - THE VEHICLE IS IN PRISTINE CONDITION - THE STUNNING EXTERIOR IS FLAWLESS, FEATURING THE NEW GUNMETAL / GRAPHITE METALLIC PAINT, EMITTING A SILVER CAST UNDER LIGHT, SET OFF WITH THE NEW LIGHTWEIGHT ALLOY WHEELS - THE CUSTOM TWO TONE INTERIOR IS IMMACULATE THROUGHOUT - ALL MECHANICAL AND WEAR COMPONENTS WHICH WERE NOT LIKE NEW HAVE BEEN REPLACED WITH OE PARTS - THE VEHICLE HAS NEW STATE INSPECTION STICKERS FOR SAFETY AND EMISSIONS - IT HAS BEEN FULLY SERVICED - THE STEERING, HANDLING AND SHIFTING ARE TIGHT, SMOOTH AND FRESH AS NEW - THIS VEHICLE WAS ORIGINALLY ORDERED WITH EVERY AVAILABLE OPTION - THE AIR CONDITIONING SYSTEM, ALL POWER OPTIONS AND GAUGES FUNCTION PERFECTLY - THIS OUTSTANDING VEHICLE TYPICALLY RECEIVES THE PRIME LOCATION AT CAR SHOWS AND DRAWS LINES OF ONLOOKERS - A CLASSIC FOR THE DISCRIMINATION COLLECTOR OR NISSAN / DATSUN ENTHUSIAST - THIS IS A NO RESERVE AUCTION - THE HIGH BIDDER WILL WIN THIS VEHICLE - CALL, IF ANY QUESTIONS - (412) 736-3600 - AT AGE 76, I PREFER THE OLD FASHIONED PHONE CALL, OVER TEXT OR EMAIL - AFTER DECADES OF COLLECTING CLASSIC CARS, I CAN PROVIDE YOU WITH EXCELLENT SOURCES FOR FINANCING AND WORLDWIDE DELIVERY