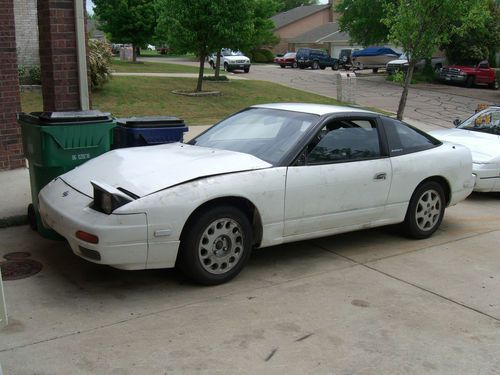 1992 Nissan 240sx 5 speed parts car.  You can repair this car or use it for parts.  Wreaked but runs and drives as it should with cold a/c and heat.   In the pics there are no seats but have I some soild grey s14 95-98 240sx seats that come with the car with no rips or stains. I am selling as a parts car due to having no title.  I am selling the car with a bill of sale that I will get notarized the day of payment.  This 240 is located in Colbert OK one hour north of dallas Texas.  I am including within 300 miles of free delivery on me, striaght to your garage.  I can go a little more than 300 for a a small fee per mile.  If you bid and are more than 300 miles from Colbert OK please contact me. Full payment due via pay pal within 48 hours. I am selling 2 other project/parts cars that I will be listing on Ebay.  Thanks