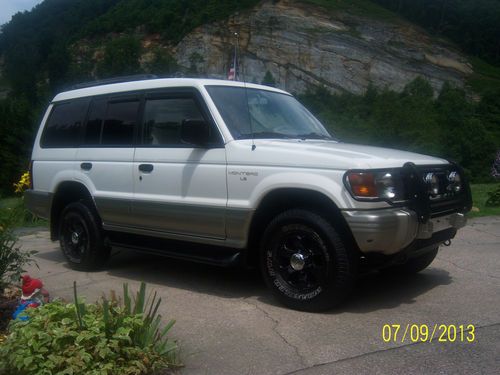 Condition: Used: A vehicle is considered used if it has been registered and issued a title. Used vehicles have had at least one previous owner. The condition of the exterior, interior and engine can vary depending on the vehicle's history. See the seller's listing for full details and description of any imperfections. ...
1997 Mitsubishi Montero LS 4X4
This is a great vehicle we have been driving daily. Very roomy and a great riding 4 wheel drive SUV. We also have a 1993 Toyota 4X4 and don't need 2  four wheel drive vehicles. This SUV is in great shape and ready to go. The A/C works great and is very cold. All the power windows, sun roof and door locks work.The only that does not work is the cruise control. It needs the switch on the dash and the cost is $81. The wheels are the factory grey alloy wheels that we painted black. Good Year Wrangler All Terrain ( about 40% tread)
Power windows
power moon roof
am/fm/cassette  and 6 cd player
seats 7
2- fold up rear jump seats
rear swing open  style door
2" hitch with wiring
email with any questions
vehicle is being sold locally and may be removed before auction ends
delivery up to 100 miles
delivery fee $100