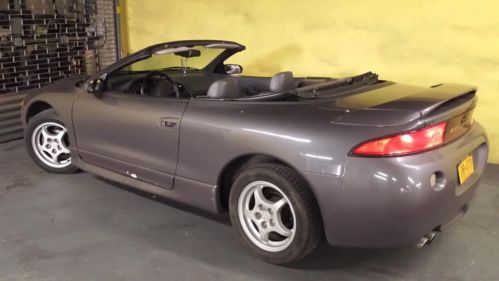 Mitsubishi is issuing a recall for the 2010-2014 i-MiEV that affects 1,810 units of the little electric car, because it's possible for the brake vacuum pump to stop working. If this happens, the result would be longer stopping distances, according to the company. The affected models were built between September 15, 2009, and March 25, 2014.
While this is just a single recall, there are actually two things that can cause this brake problem on the i-MiEV, according to Mitsubishi's filing with the National Highway Traffic Safety Administration. First, bad programming in the EV-ECU could cause the system to "falsely judge that the relay contact point is stuck," according to the full NHTSA defect notice PDF. Second, the vacuum pump exhaust hole could be corroded and blocked due to being splashed with road salt. However, the company says that if either fault happens, the brake warning lamp would illuminate, and there would be an audible alarm.
Depending on which issue is affecting an owner's i-MiEV, Mitsubishi is going to reprogram the software, replace the pump or both. Scroll down to read the recall report from NHTSA.