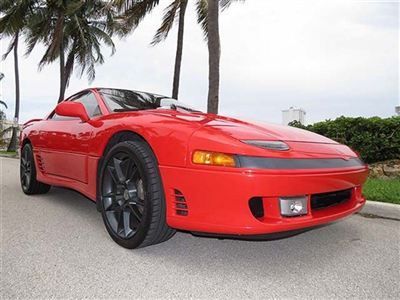 Rare find,  1991 Mitsubishi 3000GT VR4  5 speed, all wheel drive, all wheel steering and switchable exhaust that all work!   that hasn't been slaughtered up, or raced,  52,932 miles, super clean, runs perfect, interior is like factory new condition!!    The following is known items car needs and verified by shop that just installed  the brand new $900 - 2 piece driveshaft, 75$  seals and new air filter system $40 and fuel filter $40  this month.

Vehicle was repainted a few years ago and done absolutely professionally!!!! there is not 1 bit of overspray or mistake, cost over $6000,  and the only flaws are road debris chips on hood and bottom valance. this ain't no backyard or Maaco paint job, the same shop in Miami that does Ferraris did this spray job.

Car is kept inside, driven by adult, and is being sold due to owner having a knee problem that make pushing clutch pedal impossible.

Buyer is responsible for pickup or shipping,  Title is clear and in hand,  all receipts for work done is on hand, and any OEM parts will be included in sale.

Just take one look at Mitsubishi's latest vehicles, both concept and production, and it's obvious that fuel economy - not performance - reigns supreme. With this in mind, it shouldn't be too much of a surprise that Caradvice.com.au is suggesting that Mitsubishi is putting development of future performance models (like the 2013 Lancer Evolution GSR shown above) on hold as the company focuses on electric and plug-in vehicles.
In speaking with Mitsubishi managing director of product projects Ryugo Nakao at the Tokyo Motor Show, the publication says that the entire Lancer redesign is on hold, meaning that the aging Lancer Evo and Ralliart will have to contend with fresh performance models like the Volkswagen GTI and Subaru WRX. That being said, the article doesn't completely shut the door on another Evo - in fact, it goes on to indicate that when a new generation does hit the streets, it will almost certainly do so with some sort of electric-assisted powertrain, an oft-repeated rumor that got its legs as early as 2010.