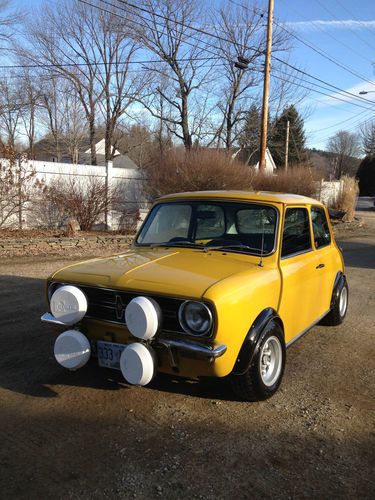 Condition: Used: A vehicle is considered used if it has been registered and issued a title. Used vehicles have had at least one previous owner. The condition of the exterior, interior and engine can vary depending on the vehicle's history. See the seller's listing for full details and description of any imperfections. ...
1969 Classic Mini Clubman with 1275GT A+ Turbo Engine.
Thousands spent!!
Lots of upgrades:
4 speed straight cut gear box
BWA Racing Rims
Full Maniflow Exhaust
Upgraded Shocks and Brakes
Turbo Blow off valve
4 CIBIE Rally Racing lights
Revotech Silicon Hose kit
OMP steering wheel
Racing Pedals
Turbo boost gauges
Mini 40 year Anniversary Bucket Seats
CD player with Kenwood amp pioneer speakers
K&N Air Filter
and much more!!
Very quick and a joy to ride. Car is always stored in a heated garage. Tires have good tread, brakes are good. No leaks or anything. Car has given me no problems. Please email with any questions. Car is located in Southern Maine.